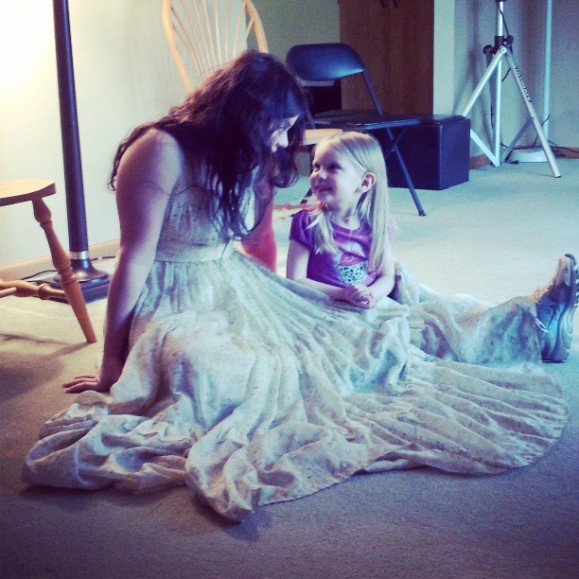 My daughter has a new Favorite Princess and I couldn’t approve more if I tried. This weekend the immensely talented Rebecca Loebe came to my house for a house concert in between tour stops. Becca and I met back in college, more years ago than I care to admit ;o) – I was interviewing her for the school paper during a coffee shop concert series and thanks to Facebook being recently invented back then, we’ve managed to keep in touch. When she asked if I was interested in hosting a house concert for her, I was pretty sure I was crazy for saying yes, but also kind of couldn’t say no. How often do opportunities that cool come up?

My kids were amazed that such a talented musician was mommy’s friend and that we were having a concert IN OUR HOME. When Rebecca came inside, BB said “YOU’RE A PRINCESS, JUST LIKE I’M A PRINCESS!” on account of Becca’s pretty dress. It’s all about wardrobe, guys. My kids did so amazing staying up for the concert, I was pretty worried that they would get all cranky and miserable but they held it together and experienced some amazing music along with my friends and a few new friends, too. The whole thing just went really well and best of all, I got to catch up with Rebecca and introduce her to my kids. One of the best nights of my life, basically. Memories of my kiddos dancing to Bees & Zombies and then cuddling on the couch with me later that night while listening to Lay Me Down Lowly, one of my first favorite songs of hers, written by her father – just surreal to say the least.

Pretty in Plaid by Jen Lancaster, one of my fave authors and always sure to deliver when I need a good laugh kind of read.

“In Pretty in Plaid, Jen Lancaster reveals how she developed the hubris that perpetually gets her into trouble. Using fashion icons of her youth to tell her hilarious and insightful stories, readers will meet the girl she used to be.”

I’ve just started watching Chopped recently during a random lull in afternoon tv and in particular, I’m enjoying their All-Stars challenge. Some of my fave celebrity chefs have made appearances which is always fun. A new-to-me chef that I really enjoyed was Nadia G from Bitchin’ Kitchen. So I decided to check out her show on the Cooking Channel and it was hilarious and also the food looked amazing. I paused it about 10 minutes in and decided hubby had to watch it with me and he was equally loving it.

We all watched The Tale of Despereaux over the weekend and enjoyed it – super cute, sweet kids movie that reminded me I really aught to read the book.

In my ears:
I’ve had Rebecca Loebe stuck in my head obviously – Swallowed by the Sea and Darlin’ in particular.
Items of Note:
Doc stayed at a Kennel over the weekend so that he wouldn’t be overwhelmed by all the strangers in our home, not to mention the loud music. It also served as a trial run for future vacations we’ll be taking. According to the folks at the Ruffin It Resort he had a really great time and was very well behaved for group playtime. They were very impressed with how well behaved he is for a 5 month old puppy. I think most credit must go to his foster parents who had 4 months to make him amazing, but I pat myself on the back a bit also that we haven’t screwed him up in his one month with us so far. I’ve already booked another weekend for him there when we go camping in a few months in Door County and plan to use them for an upcoming trip to MA this summer also. Glad to have found such a nice kennel in the area. When we picked him up, he seemed well adjusted and super happy to see us and we were greeted with a little photo diary of his stay.
What I’m Looking Forward to:

Mostly those trips I mentioned in the previous paragraph. This will be our first time going to Door County and I’ve heard great things. It’s also our first time being able to pay for a flight back to MA to visit family. You may have picked up on the fact that I’ve been missing our extended family a lot lately so I’m looking forward to getting to spend some more time with them soon.

what are you into these days? Let me know in the comments below!