I can be pretty shy and withdrawn when I first meet people, whether at work or with the kids at the playground. My preferred state of being tends to be blending into the wallpaper – I’m not aloof or uninterested, I’m just terrible sometimes at mustering out more than a hello. I thrive on people who can just walk over and say hello and have some other sentence in their arsenal of meeting people besides a smile and a wave because that’s probably all I’ve got. I’m working on it, but it’s still largely true.

So if you are meeting me and we’ve said our hellos and we’ve smiled and I’ve got that look on my face that says “I’m terrified and thinking about pretending to be a lamp post now,” don’t let me off the hook – ask me a question that forces me to become human. Your best bet? Ask me about books. Books I come alive for without hesitation. I can talk about books, always.

So it’s unsurprising that the prompt at Mama Kat’s Writer’s Workshop that jumped out at me this week was:

I could list twelve. You should see how many books are on my kindle right now, never mind the print books that are stacked on shelves and creeping up the walls of my bedroom. No matter how good the book is that I’m reading, there are always a half dozen or more books that are whispering to me from the Amazon.coms, just begging me to choose them next.

I’ve been trying to slowly work my way through the various classics that I missed out on in my formative years that were largely lost to the Babysitters Club and, well, boys. Agatha Christie is one of those names that is spoken in hushed tones of reverence. I’ve read one of her stories and it was fantastic but I’m under the impression that Miss Marple is kind of her Big Deal. You can get the whole collection on kindle right now for less than $7 – I couldn’t resist buying into that bargain and I’m thinking the fall season is probably a good time to devour these stories. 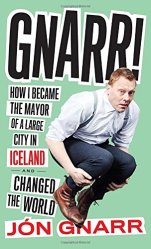 This memoir by Jon Gnarr tells the story of how a stand up comedian became the mayor of a large city in Iceland and purportedly changed the world. I saw Gnarr on an episode of The Late Show with Craig Ferguson and was just fascinated by his whole story. This is a small book that from the first few paragraphs sounds like it reads as effortlessly as Gnarr speaks so I’m looking forward to learning more about his story.

The Rosie Project by Graeme Simsion

Who amongst us internet dwellers has not heard about the Rosie Project yet? It’s been huge here in the blogosphere and I bought it awhile back when it was on sale for some absurdly terrific price. The book and it’s main character has been compared to Sheldon from The Big Bang Theory. It tells the story of  “the oddly charming, socially challenged genetics professor, Don, as he seeks true love.” Every time I read the premise of this book, I get excited to read it all over again. Why haven’t I read it yet? It’s one of the books I’m nominating for my book club this month so I’ve been super patient in the mean time.

The Happiness Project by Gretchen Rubin

This book has been on my To Read list for so long but I’ve yet to find a superb deal on it that justifies buying yet another book to read. I may nominate it for book club also just to give me an excuse! “The Happiness Project describes one person’s year-long attempt to discover what leads to true contentment. Drawing at once on cutting-edge science, classical philosophy, and real-world applicability, Rubin has written an engaging, eminently relatable chronicle of transformation.”

It sometimes seems like I live in a perpetual state of waiting with bated breath to read a book by Rainbow Rowell. Otherwise I’m ignoring all responsibilities while devouring a book by Rainbow Rowell. It’s a permanent cycle, really. Yet another of the books I’m nominating for book club this month because I can’t resist trying to spread the Rowell Obsession. This one tells the story of two best friends who know that their place of employment monitors all their work emails but can’t resist “sending each other endless and endlessly hilarious e-mails, discussing every aspect of their personal lives.” When Lincoln O’Neill, the “internet security officer” comes across their emails, he knows he should turn them in, but… Can I start reading yet?

This is another book that’s getting a lot of chatter lately. This is a sci-fi twist on Cinderella, featuring humans and androids. It sounds like the book really does stand on it’s own two feet as an original story despite an outline that will sound mostly familiar. I know a lot of people that are obsessed with this series and I’m anxious to join the club.

So that’s my short list – what would be on yours?

Have you read any of these? Which one should I start first?

Morning doodles
Made pinecone bird feeders with the kids today.
This book was a slow burn for me (pun intended) but the more I read, the more it grabbed me. The second half went by fast. I think the author did a great job peeling away the details at the right time. Very well done. ⭐⭐⭐⭐⭐ Who has seen the show on Hulu? How do you think it compares to the book? #bookstagram #bookreview #bookclub
Summer reading is looking quite promising. A few books that the library and Amazon have brought me recently. My book club will be reading The Rules of Magic by @ahoffmanwriter this month. So that gets top billing. But I'm genuinely stoked to read all of them. Have you read any of these? #bookstagram #summerreading #bookdragon #readingtime
Ran off to some nature this morning. Hiking Tower Hill State Park and fishing at our favorite little dive on the ride home. Felt good to get some sun and catch some quick road trip vibes.
Played the Babysitter's Club board game with my girlie today. She's already demanding a rematch.