When we last left off on my recap of our Epic Family Road Trip, we were visiting Metropolis Illinois, home of Super Man. That morning we had visited the Lost River Cave in Bowling Green, Kentucky. Some would consider that a pretty full day of travel but we had one more stop to make that night before we gave in and stopped for the night.

The thing is – it was actually BB’s 5th birthday that day and despite having seen a lot of cool touristy stuff that day, I didn’t want to let the day go by without doing something extra special for her. I had it in my head that we should go to Build-a-Bear to let her pick out a birthday present. But the closest one to us was ever so slightly out of the way in St Louis Missouri.

Hubby agreed that the detour was worth it and we headed to the St Louis Galleria which is coincidentally the home of the original Build-a-Bear Workshop. BB was absolutely in her glory. We’d never purchased anything there before and both kids were SUPER excited. Incidentally, neither child purchased a bear. 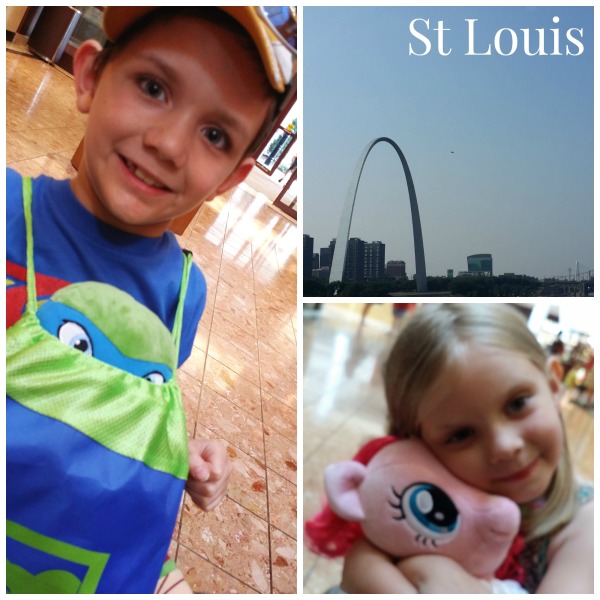 BB fell in love with Pinkie Pie from My Little Pony and when MM saw Leonardo from the Teenage Mutant Ninja Turtles there was no going back for him either. They loved the whole process of stuffing their new loved ones and picking out names, etc. Both kids got a little bag to carry their stuffed friends in and then we took the kids out for dinner at the Cheesecake Factory.

The drive into St Louis was a little crazy as we hit the town at rush hour and it was crazy packed, but we got a peek at the St Louis Arch and I snapped a picture as we drove by. The ride back into Illinois was much quieter when we left that night and eventually pulled over and found a hotel to stay the night. The next morning we had a fairly short and uneventful ride home.

And that’s the final recap of our road trip! We had such an amazing trip with a lot of memories that I know we’ll treasure forever.