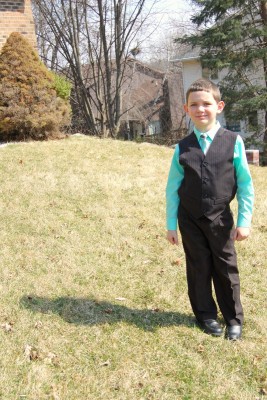 Today my baby is nine. He’s so far removed from the “baby” stage that it feels surreal to think that not that long ago he looked like this:

It goes by so fast, they tell you when you are covered in spit up and spilt milk. Savor these moments they insist when you haven’t slept in months (years?) and they are teething and pooping and screaming and whining and drawing on the walls and resisting potty training and insisting on being carried at all times and… 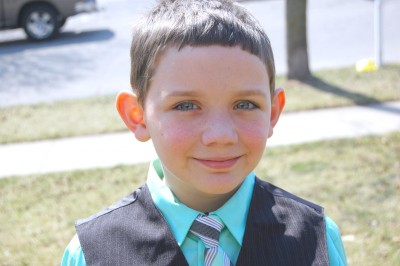 Then you wake up one day and they are nine. Sweet, clever, independent, massively intelligent little people with their own lives that don’t revolve around you.

They get themselves dressed and even do their laundry (if you ignore the details of “did those clothes ever get folded and put away?”). They help you carry in the groceries and feed the dog. They walk to their best friend’s house around the corner by themselves and know how to make a peanut butter and jelly sandwich with minimum involvement on your part. When did this happen?

MM is at this delicate moment between child and not quite child. He still loves to play make believe and run around in super hero costumes and build huge towers with legos and play video games with dad and secretly watches Disney Junior shows with his sister and probably even enjoys them.

But he is also learning things like division and fractions and writing in cursive and how to take Cornell notes and science experiments and history lessons. He’s interested in rockets  and really wants a flight simulator and is fascinated by how things work. He gets embarrassed when I get too “mommy” on him at school and sometimes runs downstairs to class before I can get in an “I love you” (other times he openly says it back and gives me a big hug, but still…) The other day he asked when he could get a smart phone (keep dreaming buddy) and before you know it, it’ll be a car.

Technically he won’t be nine until 11:50 p.m. tonight. He kind of wants us to wake him up then and wish him an official happy birthday but we’re old now and I’m not sure I can stay up that late. And it’s a SCHOOL night. So he might just have to settle for an early celebration when I’m awake enough to be friendly.

When planning his birthday party this year he told me plainly that he doesn’t want a “theme” – just some cake and some friends to play with. He wants to build with legos and play video games and that’s it. I’m torn between grateful for an easy party to plan and misty eyed that it’s the end of an era.

Oh who am I kidding? It’s never boring here. 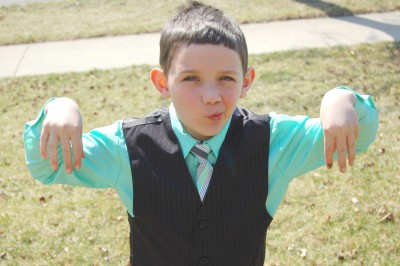 Happy 9th Birthday MM! You might be getting older but you will always be my silly, sweet, smart, sarcastic, suit wearing little guy!