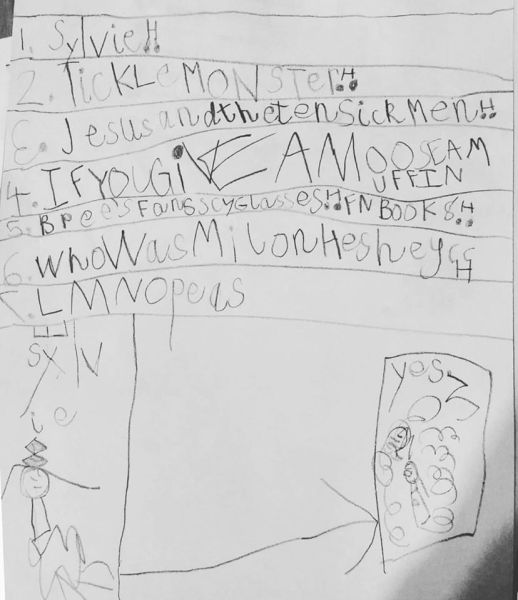 My daughter brought this list to me yesterday which she had painstakingly worked on for at least an hour. I’m pretty sure it’s a list of her favorite books or possibly it’s her TBR pile? One thing is for sure – Reading Sylvie while balancing books on your head appears to equal YES and you getting lots of hair. So yeah.

Here are the books on her carefully curated list in case you have a similarly precocious six year old in your life: 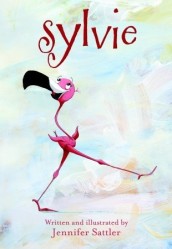 Sylvie by Jenifer Sattler – I just got this picture book for BB a week or two ago and she LOVES it. It tells the story of a young flamingo named Sylvie who attempts to change her appearance by eating new foods, with hilarious results. In the end, she learns it’s better to just be yourself. And eat shrimp. 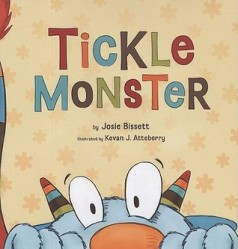 Tickle Monster by Josie Bissett – This is a terrific interactive read aloud which basically just results in you mercilessly tickling your children or threatening to do so. The artwork is adorable and the anticipation is pretty brutal in a fantastic kind of way.

Jesus and the Ten Sick Men is most likely a bible lesson from school, it’s definitely not a purchasable book as far as I can tell – but a quick google search tells me that it’s likely about that time Jesus healed ten lepers. A real crowd pleaser. It’s nice to see that my daughter has an eclectic taste in books. 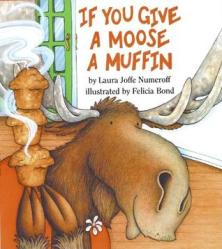 If You Give a Moose a Muffin by Laura Joffe Numeroff is an oldie but a goodie. You probably don’t need to me to describe the antics that go down in this spinoff of the If You Give a Mouse A… series. Basically, being a polite host to house guests doesn’t go well in Numeroff’s world so let that be a lesson to you children – give them nothing. According to Numeroff, “If a big hungry moose comes to visit, you might give him a muffin to make him feel at home. If you give him a muffin, he’ll want some jam to go with it. When he’s eaten all your muffins, he’ll want to go to the store to get some more muffin mix.” 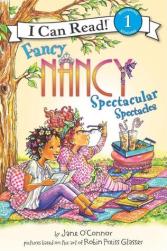 Bree’s Fancy Glasses (A Fancy Nancy Book) by Jane O’Connor which might also be Fancy Nancy’s Spectacular Spectacles – The internet is being vague on this one but I definitely remember having an in depth conversation with my daughter about which glasses were the most fancy and this book definitely deals with Nancy’s friend Bree who wears glasses. “Nancy thinks that Bree’s new glasses are simply spectacular. After all, they are lavender. They are glittery. And best of all, they come in a silver case. So when Bree tells Nancy all about her trip to the eye doctor, Nancy can’t help but wonder if her own eyesight is perhaps getting a little blurry too…” My daughter and Nancy are definitely two peas in a pod. 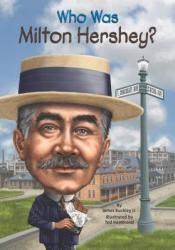 Who Was Milton Hershey by James Buckley Jr. is a book I picked up for BB’s brother before a trip to Hershey Pennsylvania a couple of years ago so I’m excited to see that the book has been making the rounds and found it’s way into the hands of BB also. I really like this series which seems informative but fun and my son was totally that nerdy kid on the tour bus who knew more about Hershey than the tour guide. #proudmomma 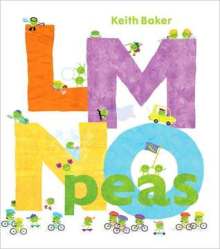 LMNO Peas by Keith Baker is one of my favorite alphabet picture books and clearly BB agrees. “Featuring a range of zippy characters from Acrobat Peas to Zoologist Peas, this picture book highlights a variety of interests, hobbies, and careers; each one themed to a letter of the alphabet and gives a wonderful sense of the colorful world we live in.” I’m always a fan of alphabet books that introduce words beyond Apple, Ball and Car.

What are some of your children’s favorite books right now? 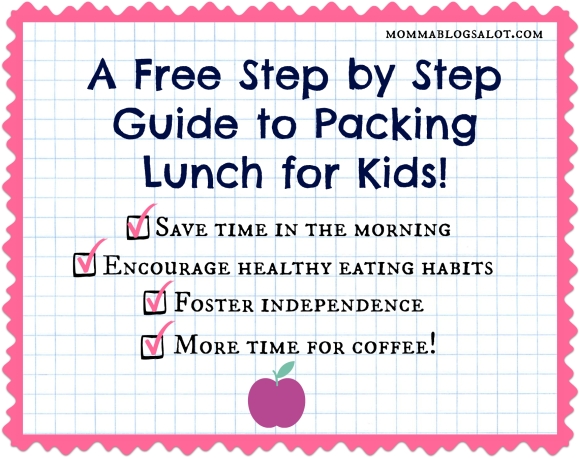 It can be applied to anything from helping with laundry, taking care of the pets, cleaning their rooms, getting their own cups of water to packing lunch for school. That’s right, I said: your kids can pack their own lunch. Maybe not the kindergartners, but with a little prodding and instruction my fourth grader is totally capable of making sandwiches and filling his lunch box (and sometimes he helps his sister pack hers, too). Somehow that extra 10 minutes in the morning has the power to totally save my whole day – or at least gives me time to drink a cup of coffee.

But what if they just fill their lunch box with sugary snacks?! You ask. This is where today’s free printable comes in. If you have been blessed with children who generally follow instruction, this printable can be your saving grace. My kids really do stand at the fridge and read through my instructions, making sure they have checked off each category. They especially love that last category. And although I am not packing the lunch, I am typically milling around the kitchen keeping an eye on things so giant packages of Oreos don’t go stowing away into their lunch bags.

Aside from saving me a little time each morning, the thing I like about this genius method of mine is that the kids can’t complain about not liking their lunch if they packed it themselves. They still get all the food groups I want them to get, but it’s on their terms. I am seeing a lot less food coming back home uneaten since implementing this beautiful little game changer and that is validation enough for me. Also, more time for coffee.

Here’s the little list of rules for packing lunch that I made for my kids: 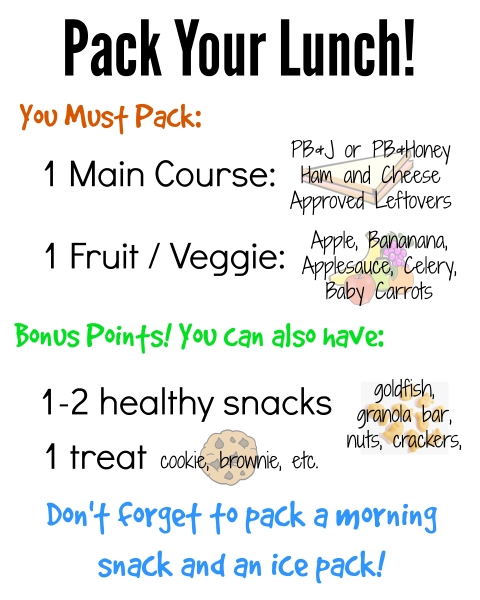 Feel free to use my printable and trick your own kids into doing chores for you, too. If you are looking at my list and thinking, “That’s not MY definition of a healthy school lunch!” or “Those fonts are horrible Jen!” – no worries, you can make your own list at Picmonkey.com or even by opening up Microsoft Word (or LibreOffice if you are an open source daredevil like me) or heck, get out some crayons and a sheet of paper and go nuts. There are no rules here except the ones you want your kids to follow.

So what are you going to do with that extra 10 minutes in the morning?