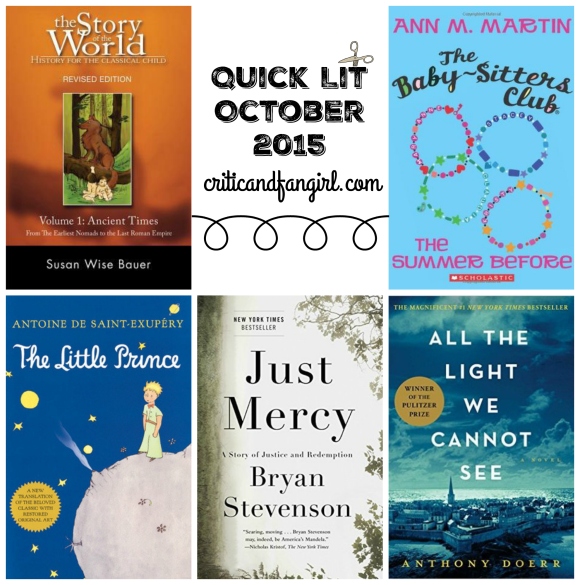 I’ve only finished two books in the past month but I’ve been reading a lot. Here’s how it’s all shaken down:

In the past month I’ve finished reading:

This book was heartbreaking and inspiring and really well written. I did occasionally feel like the author was skipping around a bit, but I suspect that his transitions would have been clearer in written form. I’m not the most attentive audio book listener. Overall, I highly recommend.

“Bryan Stevenson was a young lawyer when he founded the Equal Justice Initiative, a legal practice dedicated to defending those most desperate and in need: the poor, the wrongly condemned, and women and children trapped in the farthest reaches of our criminal justice system. One of his first cases was that of Walter McMillian, a young man who was sentenced to die for a notorious murder he insisted he didn’t commit. The case drew Bryan into a tangle of conspiracy, political machination, and legal brinksmanship—and transformed his understanding of mercy and justice forever.”

The Summer Before (Babysitters Club #0) by Ann M. Martin

It’s been a long time since I’ve read a Baby Sitters Club book so this was definitely a walk down memory lane! I thought the prequel concept was a great idea, it was cool to read about the girls before the BSC became a reality and before some of them had even met!

“Before there was the Baby-Sitters Club, there were four girls named Kristy Thomas, Mary Anne Spier, Claudia Kishi, and Stacey McGill. As they start the summer before seventh grade (also before they start the BSC), each of them is on the cusp of a big change. Kristy is still hung up on hoping that her father will return to her family. Mary Anne has to prove to her father that she’s no longer a little girl who needs hundreds of rules. Claudia is navigating her first major crush on a boy. And Stacey is leaving her entire New York City life behind…”

Right now I am reading:

All the Light We Cannot See 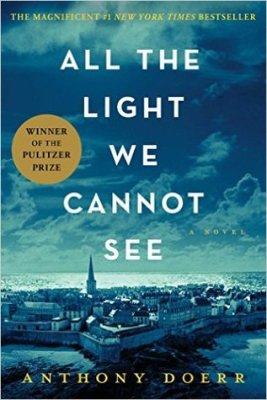 My book club will be discussing this towards the end of the month. I’m only about halfway through the book which has me quite a bit behind my personal goal, but I am very much enjoying this book which has gotten a lot of hype which I would say is well deserved. I’m not one to hop on every book bandwagon and most award winning books do not tend to win my praise as I seem to be a somewhat selfish reader. I am very much in it for my own personal enjoyment at the end of the day – but this book is VERY good.

“[This is a] beautiful, stunningly ambitious instant New York Times bestseller about a blind French girl and a German boy whose paths collide in occupied France as both try to survive the devastation of World War II.”

I’ve been reading this one aloud to my children. I chose this one because it was originally written in French which means it totally qualifies as a book that was originally written in a different language, which is one of the categories I still need to check off in Anne’s 2015 Reading Challenge. In addition to helping me finish my challenge, this book is quite simply adorable. It is a really fun book to read aloud to my kids, the writing is a bit tongue and cheek and has that kind of timeless humor that makes my English major heart cry tears of joy. If you haven’t read this one yet, you need to.

Ancient Times: From the Earliest Nomads to the Last Roman Emperor by Susan Wise Bauer

This is another book that I have been slowly reading aloud with the kids. This one might sound a little bit dry for a read aloud, but it’s actually very accessible and not nearly as boring as it might look based on the cover. But let’s back up a little.

When I was in college I took a history class that kind of opened my eyes to history for sadly the first time. Until that moment, history class was that super dry boring hour in which I was forced to memorize supposedly important dates and names. Nobody had ever taught history to me in a way that felt accessible or interesting. I made a mental note back then to make sure my kids were exposed to history in an interesting way so that they’d be more likely to WANT to learn more.

I heard about this book series through a homeschooling parent (can’t remember who) and decided to take a chance and buy a used copy of the first book (which is about Ancient Times, so far we’ve been reading about Egyptians and older) online. I have been tremendously pleased with it and both of my children (yes, even the six year old) are enjoying it and actually request it as a read aloud. I don’t read it every night or even every week. It’s one of the many books that sit on our coffee table as a potential read aloud when we have time and usually I pick it up because it’s been requested. So the fact that we’re still reading it speaks highly enough in my opinion. The fact that I’m GLAD when they request it says even more.

What have you been reading?

I’m still kind of fried from vacation so I’m answering some quick and easy Halloween This or That questions for this week’s Writer’s Workshop hosted by Mama Kat. Wanna play along? Answer these questions on your own blog or in the comments section – or check out her other prompts in case inspiration strikes.

Halloween This Or That:

1. Chocolate candy or fruity? I mean, I feel like both are essential food groups but I suppose if you held me up at gunpoint I’d probably choose chocolate. But then, later, I’d really want some Twizzlers or Skittles. So.
2. Witches of Vampires? I feel like I need to choose witch because I dressed up as a witch at least 8,000 times as a kid (sometimes even on Halloween) and I’m actually related to some ladies who were both accused of being witches during the Salem Witch Trials and who accused some other ladies of being witches also. So it’s kind of in my blood.
3. Trick or Treat? Definitely treat!
4. Halloween Party or Scary Movie? Party for sure, I’ve never really been a fan of scary movies. I do like supernatural kind of movies like vampire movies or zombie movies, but the slasher / shock you out of your seats horror movies do nothing for me. That said, I can’t promise I’ll dress up for this Halloween Party, though I will spend copious amounts of time and energy buying a costume that I’ll probably never wear.

5. Skeletons or Zombies?  I suppose zombies. I was never really into zombies until recently – we’ve had some really good zombie stories come out that are kind of breathing new life into the undead genre. Skeletons, however, remain mostly decorative and boring. Except Geoff Peterson.
6. Trick-or-Treat or Hand Out Candy? This is basically #theeternalstruggle. Because I want to be out with the kids, watching them Trick or Treat – and I also want to be at home, seeing all the cute costumes. I usually try to do both, with the husband and I working in shifts – or we all go out as a family for like 30 minutes and then go home to hand out candy to the rest of the crowd. The next eternal struggle i when we get home and realize those seemingly small bags of candy have like more candy than I could possibly know what to do with. Why do we do this every year, guys? It’s kind of gross.
7. Hay Ride or Corn Maze? Corn maze. Hay rides are kind of scary – there are no seat belts anywhere and we’re all just perched on poorly executed communal tractors full of itchy hay bales, hoping we don’t fall overboard at the next bump. Let’s take our infants! It’ll be fun!
8. Scary Costume or Funny Costume? I guess funny, I’m not deeply opposed to scary, but I have young kids so I’m not looking to scar anyone for life.
9. Pumpkin Seeds or Pumpkin Pie? How is this even up for debate? Always choose pie.
10. Bottle Feed A Baby Zombie or Walk Alone Through A Dark Forest? I guess I’m taking my chance with that forest. Zombie lore is very much a mixed bag. Some of those zombie babies are totes peaceful and others are totally about to eat my face off. A dark forest might be just a bunch of trees at night. Can I bring a knife or a can of mace just in case?
11. Bats or Black Cats? Definitely black cats. Bats are super creepy and cats are adorable (although they do make me sneezy). Also, they might just turn into a witch, who might be able to cure my cat allergy.
12. Pumpkin Spice or hot chocolate? Like just the spice blend of pumpkin pie? Versus a delicious chocolaty drink? I’d rather consume the hot chocolate than a spoonful of spices. Also chocolate. It beats pumpkin pie anyway. 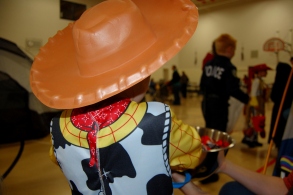 13. Celebrate in your neighborhood or at the mall? Neighborhood. I tried the mall thing the first year we moved here because the allure of being indoors was so strong and we didn’t know anybody anyway. But the reality of mall trick or treating is standing in a really long line with way too many people, begging people for tootsie rolls and other candy that you wouldn’t BUY in a store. I’d rather head over to Godiva, give them all my money and eat like a Queen, then go home. At least with neighborhood trick or treating, you can tell yourself that you are being social and showing all your neighborhood friends your kids’ cute costumes. And try not to think too hard about the candy.