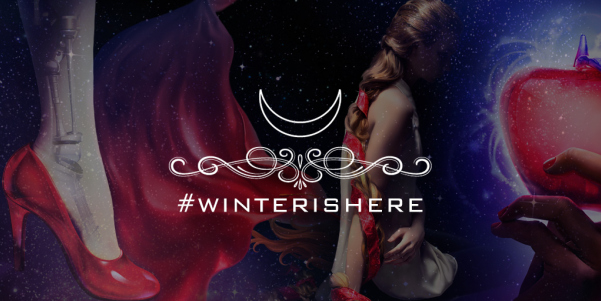 Is anybody else extremely excited about the latest book release in the Lunar Chronicles series? Clearly I’m not alone in my squealing party for one because there is a whole Lunar Chronicles Fun & Games tag thing (that’s a technical term) put together by the lovely Brittany at the Book Addict’s Guide. Thank to Mom’s Radius for jumping on the bandwagon and sharing this!

The first party game I played is the classic MASH game – have you forgotten how to play? Luckily Brittany was helpful and reminded us of the rules in her post:

All you do is pick a number (any number you want) and count off each item on the list according to your number. (For example, if you pick two, you count Winter as 1, Scarlet as 2 and Scarlet gets crossed off. Cress as 1, Winter as 2 so Winter gets crossed off, and so on). Higher numbers are usually more fun because you don’t really know where you’ll end up! Once there’s only one option left in any given category, circle that option and you do not continue to count it as you cross things off.

Here are my results: 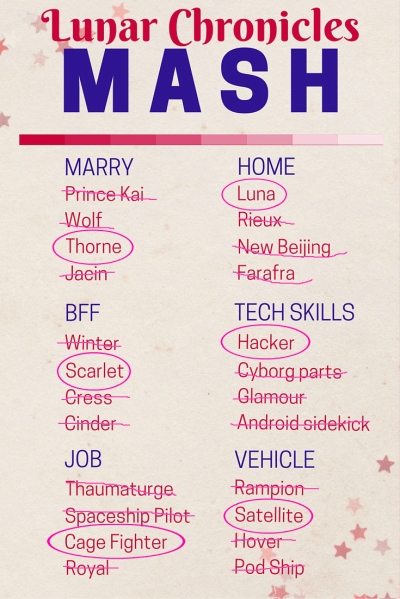 I am going to marry Thorne, be BFF with Scarlet, have a job as a cage fighter while living on Luna. I’m a master hacker driving a satellite through space. What an exciting life I lead!

Next up, we have to decide which of the Lunar Chronicle boys we want to kiss, marry or kill; choosing between Prince Kai, Thorne and Wolf. I chose…

KISS Thorne because I feel like everyone should try that at least once.

MARRY Kai because he is kind of an awesome dude and also he’s a king.

KILL Wolf not because I think he’s horrible or anything, but I’m not really down for the anger issues.

Roll your real Scattegories die or pick your own letter and find words to match the following clues. I followed Lauren’s example and picked the first letter of my name: J.

3. A piece of technology or scientific data: I actually couldn’t find anything – but not for lack of trying!

4. Occupation/Character role: a judge? Were there judges? Or maybe jurisdiction enforcers or something? Jail guards?

I got Scarlet – who did you get?

You can see my answers here!

4 thoughts on “Winter Is Here: A Lunar Chronicles Release Party!”