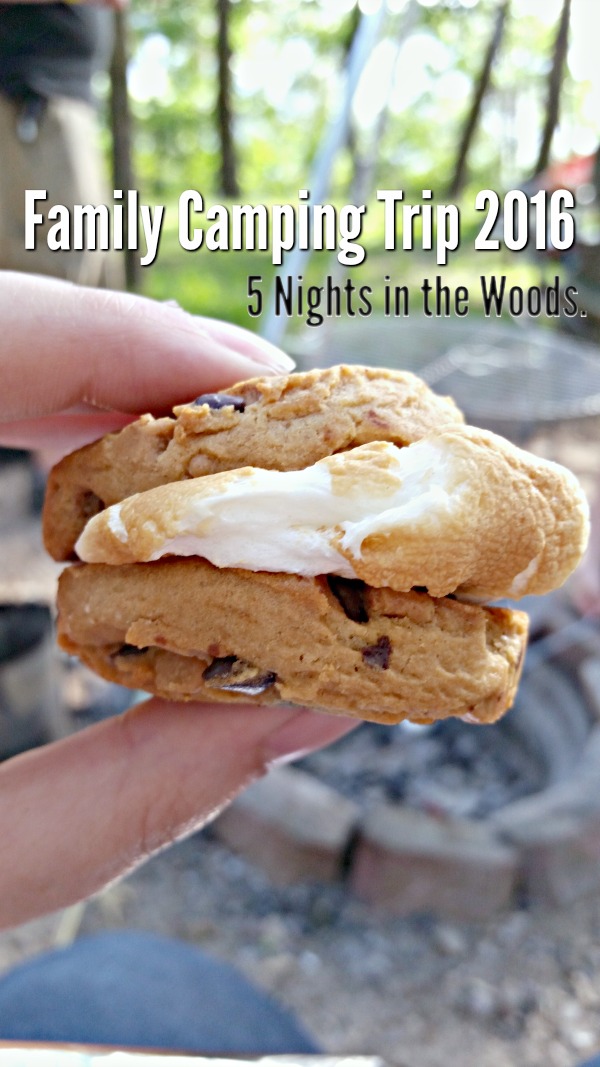 We just got back from the longest camping trip our family has ever taken so obviously I have a lot of things I want to tell you and a lot of pictures to share but I don’t want to overwhelm you guys with all the things so I’ll attempt brevity here.

You might be asking yourself, “What kind of crazy person would agree to sleep in a tent for five nights????” I know, right? But the idea came to me when I was trying to come to terms with my ten year old son going to a 3 night cub scout camp by himself that was a 2 hour drive away. Logical Jen said “he’ll be fine, he’ll have so much fun!!” but Anxiety Jen wasn’t having it and was dreading the idea of being so far away. She had lots of super sensible / shrieking insensible gibberish reasons for being apprehensive.

So the two Jens in my head worked together to find a compromise and that compromise was for the rest of us to take a camping trip of our own nearby so that we’d have a shorter drive if anything happened (nothing happened) and I’d be too busy to go all mopey zoo lion for three days (it worked). I didn’t want MM to miss out on our camping trip though so I added an extra two nights onto the trip so that we’d get some quality family time in with all four members of the family, too. My husband meanwhile heard, “Wanna go camping for 5 nights???” and was smart enough to jump on the opportunity before I came to my senses.

Annnnnyway, we went, we survived, there are pictures to share and stories to tell but here’s the cliffs notes version.

1 – Wizard Quest : The first day of our trip we took the kids to Wizard Quest while we waited for our check in time at the campground. It’s kind of a labyrinth / scavenger hunt / puzzle that has you walking through a 13000 square quadrasphere (as they call it) solving riddles and puzzles and finding clues throughout the building. We played through the 75 minute beginners level and didn’t finish our mission but still had a great time. I recommend going with a mix of ages because you’ll want little kids to crawl through some of the little tunnels and tubes but you’ll need some big kids / adults to figure out some of the puzzles.

2 – Enjoying beautiful sunsets on the river. We stayed at the Holiday Shores campground in the Wisconsin Dells which is close in proximity to all of the local waterparks and tourist traps but nestled into the woods a bit and right next to the Upper Dells River which you can see in most of the pictures above. Our camp site was right on that river and we took full advantage. Dan and the kids did a bit of fishing and I took lots of pictures at sunset and it made a nice backdrop to all of our camping festivities. The camp ground has a beach area on the river also as well as boat rentals and more.

3 – We pretty much had the campground and the Dells area to ourselves. Camping during the week meant that the first four days were pretty low key. It wasn’t until Thursday night that things picked up and by Saturday it was so crowded at both the campground and the Wisconsin Dells area that we were kind of thrilled to be leaving which was honestly perfect timing. I will have to remember this for our next trip.

4 – We got a lot of quality one on one time with our six year old daughter. A fringe benefit to the whole cub scout camp thing was the ease of parenting just one child for basically the first time in nearly seven years. It was kind of a cakewalk by comparison, you know? We had a lot of fun playing mini golf at Pirate’s Cove, walking the Broadway strip, going to a paint ball range, getting ice cream and seeing Finding Dory together. I think she enjoyed being the center of attention for a few days.

5 – I walked an average of 10,000 step every day that we were there so I probably look like a super model now. I think 4,000 of those steps were probably going to the bathroom.

1 – Having to walk 5 minutes to the bathroom every time I had to pee or a child had to pee. Especially fun in the middle of the night. The best part about coming home was closer proximity to bathrooms, honestly.

2 – I spent a part of every day being either too hot or too cold and most days I experienced both. Thank god for bandanas, because I was a sweaty hot mess for most of the trip.

3 – When the campground did fill up, the constant stream of people definitely got to me. The campsites were decent sized but felt very pushed together once we got closer to the weekend. And we had some pretty noisy neighbors that kept us up a few nights. This is nothing new and pretty par for the course with camping.

4 – I went through cell phone battery packs like they were going out of style, and wasn’t really doing all that much. My phone and I were at war for much of the trip because every time we drove twenty minutes in any direction it decided I had no coverage and didn’t know where we were anymore until I restarted and then it was fine again. First world problems, I know.

2 Replies to “5 Nights in the Woods: The Highs and Lows.”

New uniform, who dis? Ignore my messy house in the background and let's talk about how grown up he looks in his black belt uniform. 🥰🥰🥰
A quick watercolor flower to unwind.
This is a mixed bag for me. There's lots of little details I like but at first glance I feel like I could have done a lot of this with Crayola markers. #learningandgrowing #watercolorwednesday
I made a second vanilla pineapple rum cake for the teachers at school today. I was out of eggs and substituted with yogurt. My inner Paul Hollywood says it's too stodgy but my kids actually liked this one better. 🤷‍♀️
I couldn't let Emily have all the clip on earrings fun. #becausecoffee
I call this one Looks Better in Person. #weekendwatercolor #flowerpower #dreamingofspring