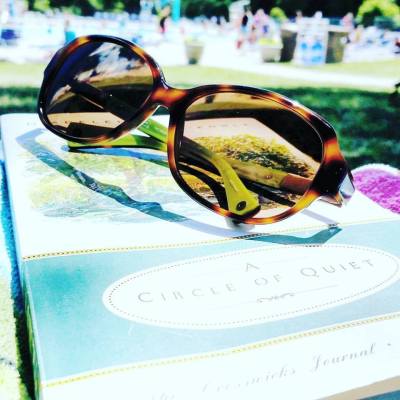 It’s hard to believe June is nearly over and yet June was so massively packed with memories and milestones and some other ‘m’ word that I’ll think of in twelve minutes that really June has had its time. Its ‘moment’ (haha I’m early) so to speak. I thought I’d link up with Leigh Kramer and share what I’ve been into this month so I can reflect on all this Juneishness before it’s gone.

We had a mini spree of out of town visitors this month. Grandparents and aunts and beloved friends who sort of live here in town but sort of live out of the country, too. We’ve been savoring minutes with these loved ones while we can.

The kids tried to put the Tooth Fairy out of business by losing like all of their teeth or like half a dozen between the two of them. Somehow my six year old still managed to have baby teeth dangling by a thread for long enough time spans that we almost went insane trying to get them out of her mouth without being arrested for child abuse.

We went camping for 5 nights and somehow I didn’t literally die of boredom and mosquito bites. (Also, the ten year old camped without us at cub scout camp for 3 days and everybody LIVED! Yay!) Three cheers for survival!

The kids started swim lessons again this week and they are back with a vengeance this year. Both kids are totally dominating their lessons so far, especially BB who is making major strides finally when it comes to putting her head all the way under water and not clinging to people’s legs and making bunny faces instead of swimming.

I found a new favorite restaurant and went there like 5 times in nearly a month. Cafe Hollander is rocking my socks off, especially their breakfast menu. Yummmmmmm.

We crammed in a couple of date nights while my dad was in town and I had dim sum for the first time and was kind of in my glory. I didn’t like everything I tried but it really didn’t matter because it was just all about the experience and the company. And the little coconut dessert thingies.

I made one of my fave recipes this month, Korean Beef Bowls from Damn Delicious, but this time I mixed in some sauteed chopped Brussels sprouts and it was everything. I cooked them on the other burner while my meat was cooking and then mixed it all together in the end. ❤

We Watched Some Stuff

We saw a ton of movies this month! Between date nights, DVDs at home and family outings we saw X-Men: Apocalypse, Captain America: Civil War, Aladdin, Zoolander 2, Love & Friendship, Popstar, Me Before You, Finding Dory and Antman! Faves were probably X-Men, Me Before You and Finding Dory but all were great.

On the small screen, we’ve been catching up on our favorite Late Night shows (Colbert and Cordon), checking out the new Top Gear crew, and I’ve been watching this season’s Food Network Star. Plus a handful of the usual sitcoms.

Also, Game of Thrones is over for the year and I’m in mourning along with the rest of the world. We fell fast and hard for this show last year and now we’re all caught up and I’m not sure what to do with my Sundays now.

I’ve Been Reading Stuff, Too

When I’m not taking pictures of like every book I own for instagram challenges, I read some of the books, too! This month I read:

Right now I’m reading The Versions of Us by Laura Barnett which my book club will be discussing in July as well as A Circle of Quiet by Madeline L’Engle when I’m sitting by the pool at swim lessons and You’re Never Weird on the Internet (mostly) by Felicia Day because I’m impatient.

That’s about it for now – until July lovelies!