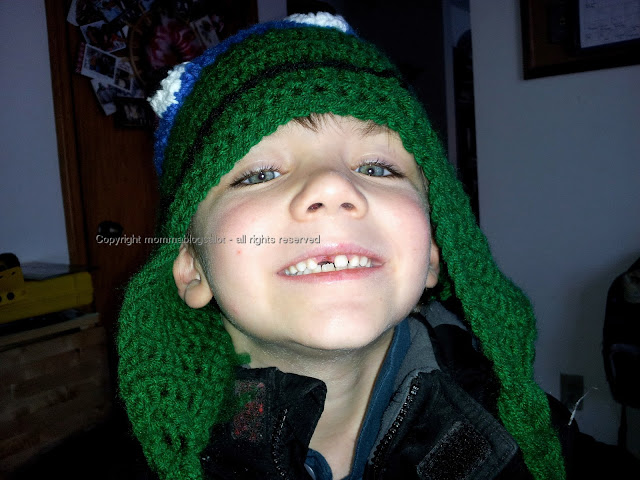 I’ve been doing a lot of “2012 recaps” and “top photos of” posts lately and very little of my typical day to day blogging, so before the month gets away from me, here is some stuff that’s been going on lately.

MM lost his first tooth of 2013 last week while I was running my first board meeting as the president of my women’s social group. I came home to a son with a giant gap in his smile and a really cute note for the tooth fairy asking her if she was Santa’s grandma. Too cute.

ps: According to the Tooth Fairy, or TF as she’s sometimes called here, Santa is her third cousin (twice removed). In case you were curious. 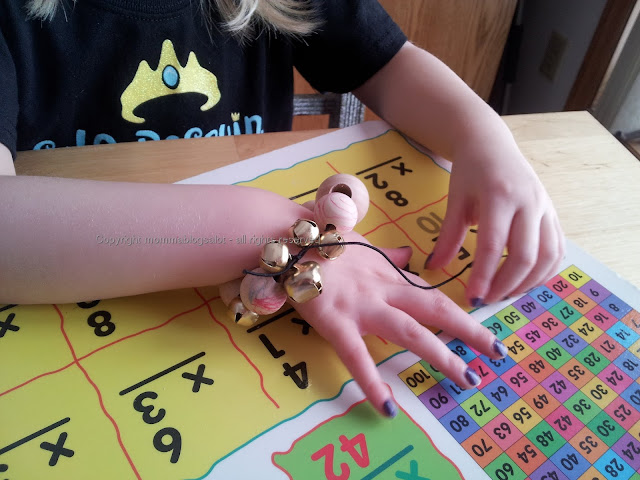 It’s been a long time since I’ve done some crafting / Fun Mom activities with the kids so this weekend I pulled out an unfinished Kiwi Crate from November (let’s not talk about the fact that I still need to open December’s) and made jingle bell bracelets with the kids. Sometimes they are also anklets, shoulder bands and necklaces for BB’s baby dolls. Thank god for stretchy strings. This went over really well and I liked that I felt like I was sharing a hobby since I’m all into beading and stuff these days and by these days I mean sometimes, when I find the time. 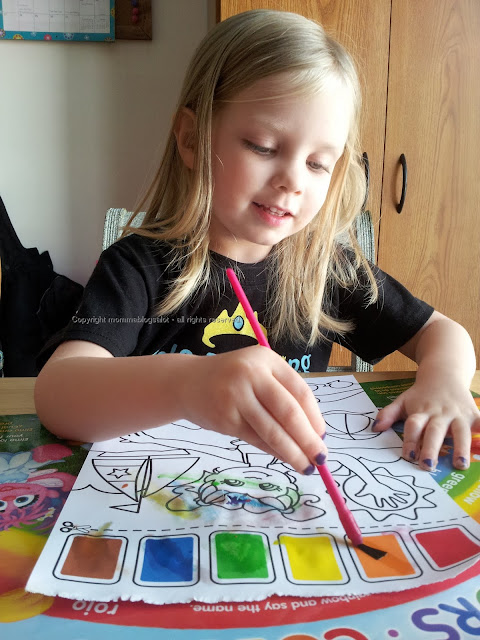 MM has been working with Dan on his first ever Pinewood Derby car for cub scouts and having soooo much fun. They designed it to look like Dan’s truck, even down to the 4×4 written on the side. Too cute. While the boys are doing boy stuff, BB and I have been having our own fun. This weekend we did a bit of watercolor painting. How cool are these pads by Melissa and Doug? Wet your paint brush and dab it on the colored rectangles on top and it turns into paint that you can apply to your picture. Relatively little mess involved and she had a blast. 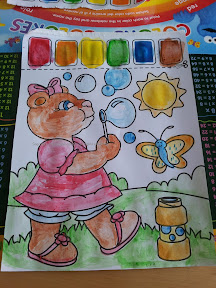 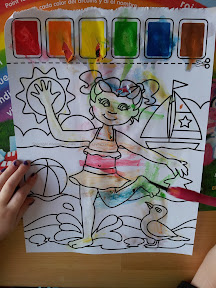 Here are our finished paintings – can you tell who painted which one? ;O)

Other topics that have no pictures to go with them, stolen from my Facebook page:

Playing a martial arts game on PS3 with Dan – for about 10 minutes I was kicking his butt royally – then he learned the controls lol – I am a button mashing champion but that only gets me so far. 🙂

There has been a lot of video game playing at our home since Dan and I got a PS3 for Christmas last month. The whole family has been obsessed with the Little Big Planet games (amazing) and Dan has been really into Uncharted (or maybe Unchartered? Or something else completely?). We recently picked up a used martial arts game that apparently has characters from lots of different games to make it more exciting. I had a lot of fun kicking his butt until he learned the controls. Then he discovered tutorials and I’m now too scared to play against him! j/k

Had one of those awesome grocery shopping trips filled with good decisions, fresh produce and healthy snacks. Obviously the kids weren’t with me lol

Took a walk before dinner tonight and made a game of jogging on all of the sidewalks NOT covered in snow or ice. Fun kind of “interval training” method and luckily for me, there was a lot of snow! :O)

What is it about the new year that makes us want to get back into shape again? All that delicious holiday food and our normal routines slipping by the wayside as we spend more days celebrating than not. And then when the festivities are over, we find ourselves a little heavier than we remembered and realize how long it’s been since we’ve worked out properly… In stereotypical fashion, Dan and I have both been feeling the push to make better choices lately and I have to say, there’s never a bad reason to listen to that inner voice telling you to behave, eat better and move more!

Movie night! Watching Secret of the Wings with the kids, then Moonrise Kingdom with hubby 🙂

I want to make more of an effort to have a regular family movie night in 2013, at least once a month if not more often. This weekend we watched two really great movies, one for the whole family and one for the adults. I might alternate with movie night and game night. Lots of ideas :O) If you have been thinking about doing Family Movie Nights, this post at Design Mom today was very inspiring.

What have you been up to lately?