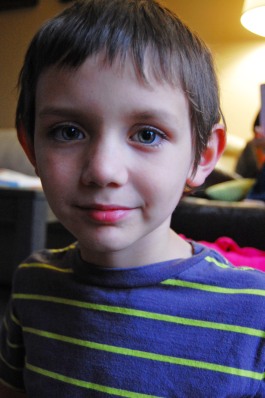 MM is seven and a half. He loves to act out legendary feats of adventure in which he is Doctor Who and we are all his companions – he will gladly take you on an imaginary tour of his Tardis, showing off the swimming pool and library and anything else you can think of. His favorite sound is the Tardis about to take off (you know, with the parking break on) and if he could wish for anything it would be that Doctor Who was real.

He is the kind of kid who pretty much loves everything and tends to think everyone is terrific. He always wants to know what’s coming next. Like his mother, he’s always craning his neck to see what’s coming around the bend – what’s for dinner, what are we doing tomorrow, is it Christmas yet, can we watch one more show?

He is smitten with karate classes and works really hard to focus in class and master the moves, but you can tell it’s reaaaaallllly hard for him to hold that focus when he’s surrounded by all those kids. He’s motivated to compete with his kid sister and classmates and to make his teacher and parents proud, and although he thinks all the karate moves are awesome, he doesn’t have a violent bone in his body.

He is an avid reader and can spend hours curled up with a book but he’s terrible at telling time so if you ask him how many minutes are between 5:51 and 6:24 he might answer something like 137 and have honestly no idea why that would be wrong. He can read small chapter books but really loves picture books – the more pictures the better in his opinion.

He loves to draw and color with his sister and create “projects” – anytime he can use scissors and glue and he is a happy camper. He is fascinated by how things work and grow and loves to learn about gardens and bugs and science and nature.

He is a really, genuinely good, sweet and clever kid. He tries very hard to make the people around him happy and brightens every room he steps into with his smile. He is charismatic and charming, intelligent and silly, good natured and hard working. He makes his momma very proud.