Eight years ago I married my best friend. It sounds cliched but it’s true. It was what many would dub a whirlwind romance and others privy to the length of our mutual crush might call “about damned time.” It was a risk though declaring that we would love and honor and respect each other forever. It’s always a risk to commit yourself to someone and this was one of the best risks I’ve ever taken.

The first of many, really. Dan and I have continued to take risks together. Not the adrenaline filled action star risks like jumping off airplanes or shooting a gun while hanging off the outside of a moving car or challenging the Stig to a race. But the day to day suburban risks of married life like “Let’s move to Wisconsin even though we don’t know anyone there” or “Let’s take a month long road trip so we can visit all of our family and see the Washington Monument and the Mammoth Caves along the way.”

He encourages me to take chances and that leap of faith has been worth it every single time. 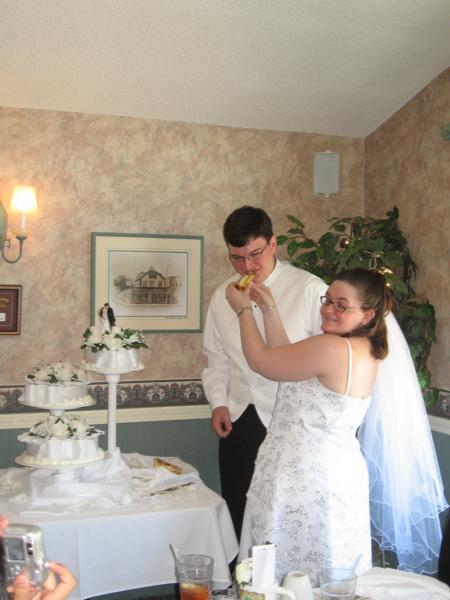 I look back at these wedding pictures and I’m just amazed at the confidence we had in each other. We barely knew each other. I had no idea what an amazing guy I had truly stumbled onto, but somewhere inside myself I knew this guy was the one. I think I was more worried about the actual wedding than I was about the marriage which was probably naive but it worked out okay, so I guess my gut instincts were on to something.

But seriously – look at us! Look at that guy who doesn’t even know how good he looks with a beard yet and has never imagined living in Wisconsin. He doesn’t know he’ll be a father of two someday or that his wife will be keeping him up at night talking about John Mayer’s love life or the latest book idea she may never finish. She doesn’t know that she’ll have basically that haircut for the rest of her life and that while he’ll seem to change with every photograph, she’ll pretty much always seem to look like that, for better or worse.

We knew nothing except that we loved each other and that seems to have been all we needed to know.

I don’t know what the next eight, twelve, fifteen or fifty years hold in store for us but I hope we continue to take chances and learn new things about each other. Here’s to many more leaps of faith with you. And hopefully more cake, too.