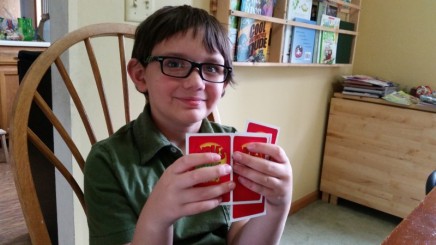 Totally not going for my incognito photo shoot 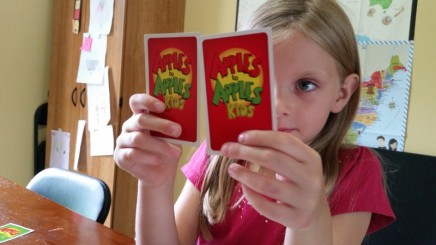 Plotting her next choice.

It was actually a game afternoon. Our plans for the day had been foiled by a car that opted not to play along with my intentions of going grocery shopping, so I had the brilliant idea to play some favorite games (we also played Connect Four and The Princess Cupcake Game) with the kids to distract us all (mainly me) from the car troubles and cancelled plans. Basically, mother of the year right here and not in the sarcastic sense.

I’ve been a fan of Apples to Apples for years so having the kids edition and children who are old enough to read is kind of fantastic because it means that Candy Land can finally have its (permanent) rest and game night (day) can be fun again. My favorite part is always the end, when I announce to them that all the green cards they’ve won are actually descriptions of themselves – they found this hilarious.

This isn’t a sponsored post btw. I’m pretty sure Mattel has no idea who I am.