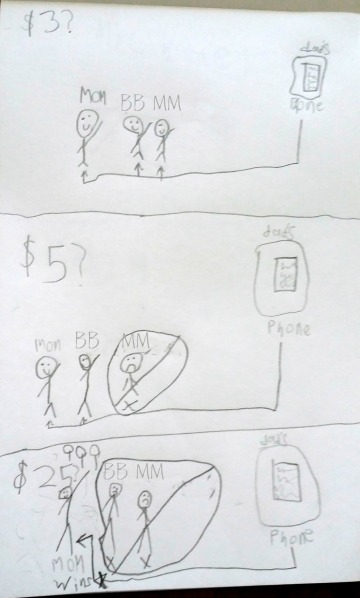 I explained to MM recently how auctions work. We were playing LIFE Twist & Turns and he landed on an auction space and asked what an auction was so I very carefully and elaborately explained the concept to him using my phone as an example and then went off on a long tangent about how most auctions are for things like paintings and antique furniture but that there are websites like ebay where people really do auction off things like cell phones or used clothes, etc.

I thought I’d completely lost his interest by the time I finished (when did I become the parent that goes off on half hour tangents about very simple questions??) but then he drew me a very detailed diagram of what I’d explained to him to show me that he understood or that he was in the mood to draw an elaborate picture. One of those things, for sure.

Originally the phone being auctioned in his drawing was MY phone but when I asked why I would bid on my own phone, he agreed to change it to hubby’s phone instead. I’m not really sure why I’d pay money to buy a phone from my husband but at least he gets the idea.

2 replies on “How auctions work.”

I agree with the above commenter, probably balloons. lol Love that he understood and wanted to show you that he got it.

I think the 999 are party balloons showing that you won