Happy belated Halloween bloggy friends! We woke up yesterday to snow! Snow! On Halloween! To be fair, it wasn’t much more than a dusting but it still seemed like a cruel Halloween Trick. It’s pretty cold again this morning so let’s curl up with a warm cuppa and talk about what we’ve been into lately. I’m linking up again with the lovely Leigh Kramer to share what last month looked like in terms of what we’ve been reading, watching, listening to, cooking and looking at.

Apparently October was the month of final installments to dystopian serials that I started ages ago. This month I read (and finished)

And we won’t talk about the plethora of books that I started but didn’t finish because the list is long and sad. 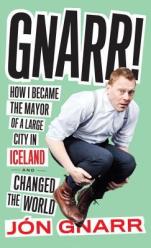 Right now I am reading Gnarr by Jon Gnarr, which is a kind of political memoir by the last mayor of Reykjavík, Iceland’s capital who won the election back in 2009 when they were in a financial crisis. If that sounds dry, you should know that Gnarr was a stand up comedian before creating his own political party which he named The Best Party. During his campaign he promised to get the dinosaurs from Jurassic Park into downtown parks, free towels at public swimming pools, a “drug-free Parliament by 2020” . . . and he swore he’d break all his campaign promises.

I’ve fallen into the deep end of binge watching old seasons of America’s Next Top Model to a nearly pathetic level a regularity. Like the children now know and expect that if the tv turns on, Top Model is happening and they love to curl up and watch the eliminations with me and try to guess who will have to “pack their belongings and go home.”

Hubby and I have also been watching a fair amount of The Flash, the only new show this fall that seems to continue to hold our interest in addition to our usual rotation (Big Bang Theory, Modern Family, The Middle, Castle, Bones, etc.)

I’ve had the song Habits by Tove Lo stuck in my head a lot which is less depressing than it should be. The actual story behind the song? Depressing. Yup. But it’s so gosh darned beautiful. I’ve also had a lot of Ed Sheeran, Taylor Swift, Paramore, Allison Trainor and sometimes that horrid Joe Jonas song stuck in my head.

If you celebrated Halloween only on Pinterest by Mommy Shorts

Self Care for the Highly Sensitve Parent at Simple Homeschool (guest post by Anne of Modern Mrs. Darcy)

What have you been into lately?

Posted on November 1, 2014 Posted in what I'm into Lately