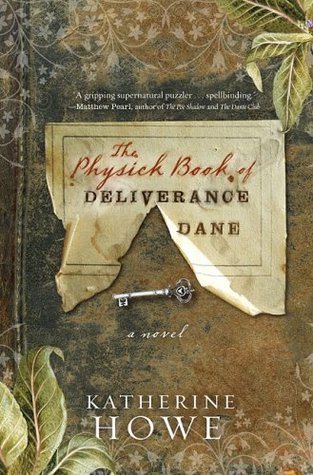 My book club is discussing The Physick Book of Deliverance Dane by Katherine Howe this month. It’s been on my To Read list for several years so I was glad to have an excuse to get a copy. As a descendant of Ann Putnam, I’m a sucker for books about the Salem Witch Trials – I devoured books like Tituba of Salem Village as a kid and I thought the concept for this novel by Howe was really cool.

Harvard graduate student Connie Goodwin needs to spend her summer doing research for her doctoral dissertation. But when her mother asks her to handle the sale of Connie’s grandmother’s abandoned home near Salem, she can’t refuse. As she is drawn deeper into the mysteries of the family house, Connie discovers an ancient key within a seventeenth-century Bible. The key contains a yellowing fragment of parchment with a name written upon it: Deliverance Dane. This discovery launches Connie on a quest–to find out who this woman was and to unearth a rare artifact of singular power: a physick book, its pages a secret repository for lost knowledge.

As the pieces of Deliverance’s harrowing story begin to fall into place, Connie is haunted by visions of the long-ago witch trials, and she begins to fear that she is more tied to Salem’s dark past then she could have ever imagined.

I liked the contrast of the modern day story mixed with the historical stuff. The chapters featuring Connie read like a young twenty somethings chick lit novel complete with love story featuring a Type A girl who studies too much and probably wears her hair in a too tight pony tail and a tall, lanky laid back guy who teaches her to relax and have fun. When she isn’t falling for him, she spends time roaming the halls of Harvard and the streets of Salem and the descriptions of each made me miss my New England home and college days often.

In contrast, the chapters telling the stories of Deliverance and her family were warm and descriptive, drawing you into the time period and the stories of these women. They read very authentically and would be well enjoyed over a cup of warm tea and dimmed lighting. As the book went on, the two plots become more and more entwined and the “modern” chapters become gradually more and more magical.

Occasionally I felt the book bordered on unrealistic, not because of the mystical elements so much as the character’s reactions to things – when things started to get more and more supernatural in Connie’s world, I found it strange that she wasn’t freaking out more and even stranger that her friends and love interest weren’t freaked out either. But putting that skepticism aside, I did enjoy the story and looked forward to spending time with it each night – the real mark of a good book in my opinion.

What have you been reading lately?