Sometimes I have a tendency to sell myself short. I will let other people do things for me simply  because I believe they can do it better, faster, stronger (more than ever our work is never ooo-ooover). But how do you grow that way? Last weekend in the woods, I learned that I know how to set up a tent. After 6 years or so of camping with DH, I actually committed this skill to memory. And did it. #likeagirl

No matter how many toys you buy them, how many gadgets they own – a kid with some sticks and rocks and a few leaves has everything they need to have fun. Minutes after arriving at the campsite, they were busy digging trenches and building fairy houses. You don’t have to tell kids how to play in the dirt – this knowledge resides at the core of their very being.

Sometimes you have to roll with the punches. The weather doesn’t care that it’s Father’s Day weekend and you have a limited amount of time for Fun in the Sun memories. Go with the flow, indulge in rainy day tent cuddles, catch up on your reading pile. Breathe.

Don’t forget to reevaluate your day often, especially on a “bad day” – because a day doesn’t have to continue being bad. You can always find beauty in it if you slow down and look. You can always pause, breathe in the dewy air and start fresh. Ignore the rainy moments, the itchy bug bites and the muddy trails and find your zen again. 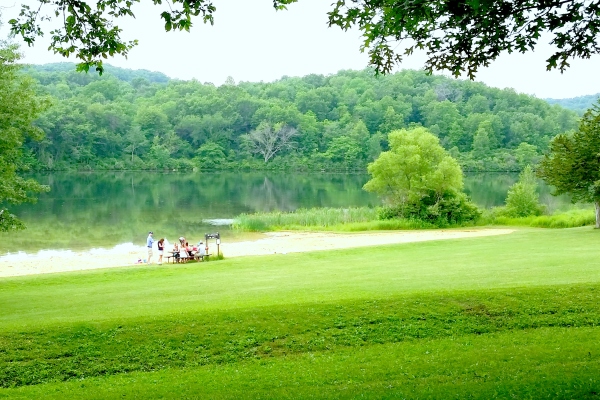 Sometimes you have to admit what you need and pursue it, even if your needs differ from the crowd. There are times for rolling with the punches and there are times for saying, “See you in 30 minutes. We’re going to go enjoy the beach now.”

“The best-laid schemes o’ mice an’ men; Gang aft agley” (translation: …often go awry | source: Robert Burns). I think I instinctively knew that if we planned for one of our meals to be the fish caught by my husband and friends, that somehow we would not be eating fish. It’s not that I don’t think they can catch fish, it’s just that I knew it was foolish to rely on it. Apparently it was foolish to rely on my backup plan, too, of bratwurst and hot dogs. Between the lack of fish and the ever persistent rain, we opted to seek out the next best thing: Fried fish, followed by frozen custard: safely indoors.

I’ve been afraid before. I’ve avoided things simply because my fear said “no, don’t do that.” Sometimes they are silly, sometimes not. But I’ve rarely pushed too far against that instinct. I didn’t know the physical manifestations that accompany fear when you push on. The way your feet try to betray you and your breath feels constricted. The way time slows down for you but seems in fast forward for everyone else who joyfully prances ahead to see the cool thing. It’s surreal to watch others around you not affected by these invisible forces.

Logic told me that the infinity room was something worth pushing ahead for and that it was unlikely to fail me. I wanted to reach the end, to see the big sights. I wanted it even more when I realized how hard it would be for me to walk that short walk to get there. I forged ahead slowly and I’m proud of myself, but I felt much better a few steps back as the air returned to normal thickness and my heart stopped hammering in my chest.

This where I wrap up my post with a sweet, heart warming paragraph about how great my family is and my words sort of contradict the things I’ve already written but also tie them together beautifully. But sometimes you don’t need to tie it all together. Life isn’t a perfectly tied bow. It’s a series of semi-unrelated incidents that only make sense if you step back far enough to let them blur together. If you stop looking at them altogether and look at the faces around you instead. Because at the end of the day, the faces are all that matters.

3 thoughts on “Things Learned in the Woods”