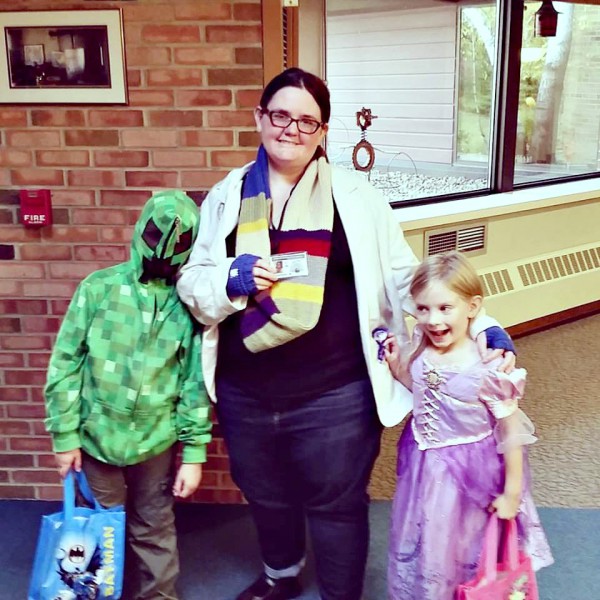 Another Halloween is under the wraps which means our house is so full of candy that it’s border line disgusting and also the stuff dreams are made of. We struck a good balance this year, I think, of attending a handful of Halloween events without feeling absolutely stressed out.

The day before Halloween the kids had no school and Dan’s work was doing an office trick or treat, so we had a little trial run dress up and headed to his office. You can see our costumes above. Yes, even mom dressed up this year since for the first time in awhile, I had a great idea and followed through on it. I’m not sure if anyone actually knew who I was dressed up as but Dan and the kids thought it was pretty much the most clever costume ever – and timely if you watched Doctor Who’s latest episode on Halloween. 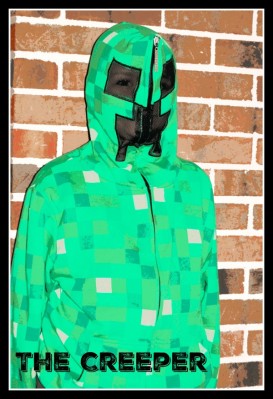 MM went dressed as a Creeper from Minecraft which really just meant that he wore green cargo pants and a Creeper hoodie from Target that zips up over the face with little square holes for the eyes and mouth. I offered to do more, he didn’t want it. I’m wondering how many more Halloween we’ll get until he doesn’t want to dress up at all (or at least doesn’t want to hang out with us).

He’s been rocking his costume everywhere – it’s basically his new favorite outfit, so I’m glad that it’s getting so much use. I’m all about costumes that can be re-purposed into regular clothing (which is why almost every element of my “costume” is also ready to wear clothing).

BB went as Princess Rapunzel which made this her third Halloween in a row in this princess dress. True to her original terms, she paired the dress with purple bunny tights and was pretty sure her ensemble was absolute perfection. All of my pictures of her pretty much look like the one below in which she is doing her signature pose – which she sometimes calls her bunny look and sometimes a mouse but mostly it’s just adorable and usually means she wants something.

As you can see: 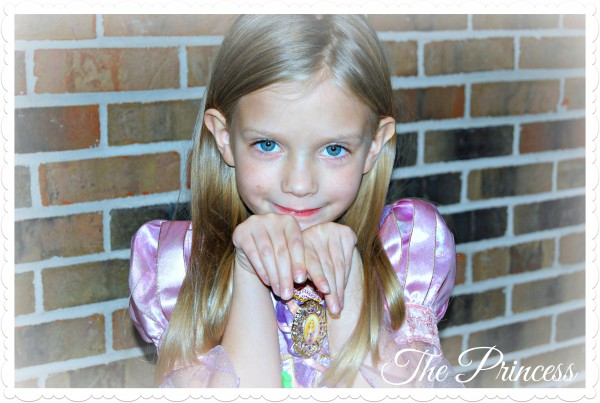 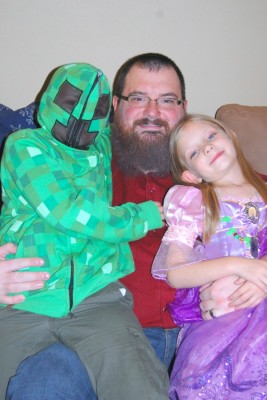 Dan dressed up this year, too… at least he kind of did. He was originally going to dress up as Santa Claus and had these major plans to dye or paint his beard white and wear a whole Santa outfit with a Santa hat and everything so we could take cute pictures with the kid. But then we couldn’t find the Santa hat and the white paint stuff he bought online was horrible and pretty much just made a mess. He wore most of the outfit anyway so I had him pose with the kids and told him I would photoshop the rest. And by photoshop, I mean edit the picture in picmonkey.com and work a little magic. 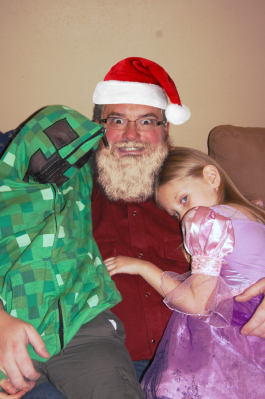 Here’s what I came up with. He took this picture making the most ridiculous smile so I gave it kind of a nightmare before Christmas feel where it’s both spooky and festive at the same time. Picmonkey had lots of options to perfect my picture and the kids had a blast helping me get it just right.

So Halloween day was pretty rainy and cold. Luckily we had lots of indoor plans throughout the day. We started the morning with a Halloween party at the karate school.

Afterwards we drove to the next town over to see a movie at the newly renovated theater that we’ve been hearing good things about – except apparently everyone in town had that idea and the movie we wanted to see was sold out. We were briefly bummed out but did some window shopping at Target and then went to the kids’ school for their Trunk or Treat event which is always a lot of fun. The kids played games and did arts and crafts projects, got a little more candy and we went home to do some pumpkin carving.

We pretty much flew by the seat of our pants with the pumpkin this year – somehow I had a last minute idea to try and make Jack Skellington from The Nightmare Before Christmas and did a quick google search for how other people had accomplished this. I traced an outline on the pumpkin free hand for Dan who then used some carving knives he’d bought for woodworking awhile back and set to work carving based off my design. I think it came out pretty great considering how amateur hour our attempt was! 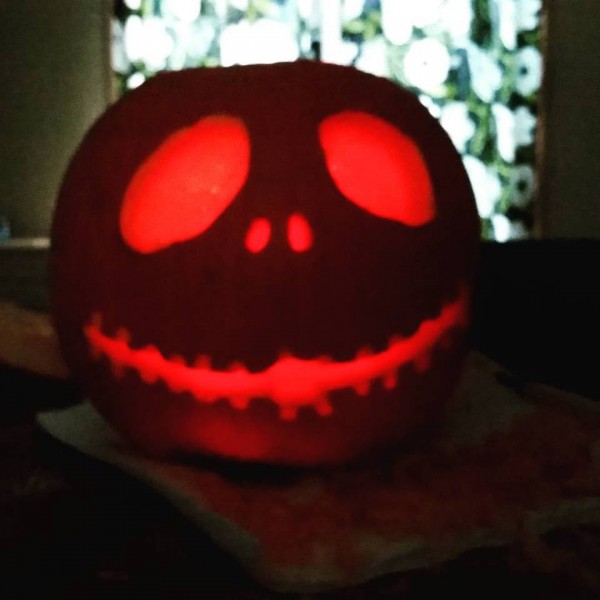 Around 5pm we met up with some friends who just moved to the neighborhood and went trick or treating. Miraculously, the rain pretty much let up the whole time we were trick or treating and it was just warm enough that we were mostly comfortable in light layers. After trick or treating down a few streets we all went to my friend’s house for dinner and rum cake (my MIL’s famous recipe that she graciously shared with us when we moved out of state). We had a great time – I think trick or treating should always be a combined effort like that. Having friends along made the venture way more fun. 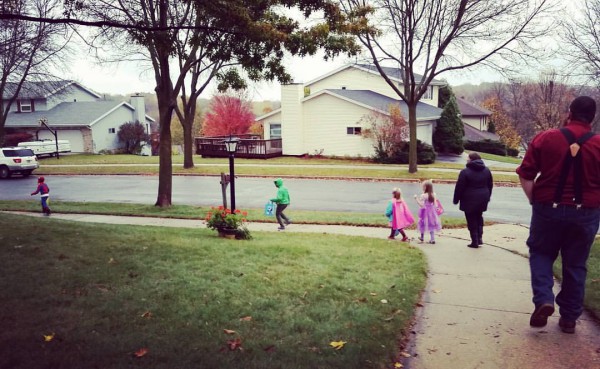 How was your Halloween?