I was tagged by Mom’s Radius to do this Lunar Chronicles book tag which is good because I was totally going to do it either way! This tag was created by Brittany at the Book Addict’s Guide. It breaks down each character from the novels (or, at least, several characters) and makes them a kind of theme – then you pick a book based off that theme. For example…

Daddy Long Legs by Jean Webster could totally be mistaken for a horror story about bugs based off the title and even this cover image. It’s not. And when you hear it was written in 1899 about an orphan girl who is starting college… well you are probably going to think it’s stuffy and boring and preachy and lame. It wasn’t until it was mentioned in the Mother Daughter Book Club series that I came across this one, but I’m glad I did because it quickly became a favorite – it’s funny and witty and trust – you will relate to Judy, the main character, or want to be her new BFF.

Want to do some more? Here is my choice for…

My brain pretty much immediately went to The Selection by Kiera Cass. I’ve read many books on royalty, but this has been a recent favorite – and one that I think fans of The Lunar Chronicles are bound to like. If you haven’t given into the hype on this one yet – definitely do so. It’s The Bachelor meets The Hunger Games, intensely addictive and one of my favorite dystopian stories.

a book with a horrible/cringe-worthy parent 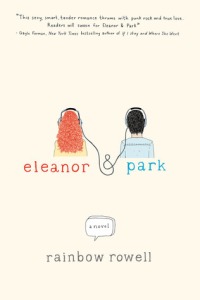 I mean… Eleanor’s father kind of takes the cake here. Eleanor and Park isn’t my favorite Rainbow Rowell novel but it is really good and it might be the one she became most famous for. It’s a sweet love story but it’s going to give you all the feels and not just the feels you ask for.

a book with your favorite happy-go-lucky character 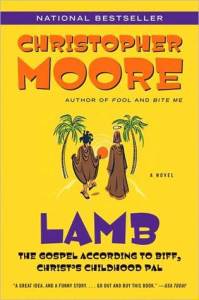 An old favorite, Biff from Lamb by Christopher Moore is one of my favorite characters and he fits spunky sidekick to a tee. I’ll admit, this book was probably my first real introduction into the story of Jesus aside from the stuff you pick up from seeing a nativity – and it’s one of my all time favorite books. Definitely Christopher Moore’s best work.

a book with a character on a mission

Someone in Isabel Spellman’s family is always on a mission. The Spellman Files by Lisa Lutz is about a family of private detectives who are all a little bit crazy in their own special way. In the category of mystery / detective novels, this is my favorite series. Everything Lutz touches is gold and she wins the prize for extra little details that bring her work to a whole new level.

a book with a brutal fight (with words or fists)

I just finished reading All The Light We Cannot See by Anthony Doerr and World War II immediately came to mind as a brutal fight. Not so much with words and fists as bombs and horrible mass genocide, but you know… This book has been all about the awards and praise but it totally is deserving of said praise. It’s a lengthy read and you will definitely get some feels but the further in you go, the more unputdownable it gets.

LEVANA | The villain
a book with the absolute worst villain

It would be lame to put the previous book in here  twice in a row, so let me dig deep a bit… I’m going to go with Moriarty of Sherlock Holmes fame. He’s always been a villain that has fascinated me, especially in the BBC show.

a book with the biggest schmoozer

Algernon from The Importance of Being Earnest by Oscar Wilde is such a Thorne-type character. I recently got to see a production of this at a local outdoor theater and the guy playing Algernon pretty much made my whole day, if not my forever. If you haven’t read this (or seen the play or movies) you definitely should. The wit and just fantastic story line are incredible and manage to never feel dated which is remarkable.

a book about technology, or sci-fi

This might seem like an odd choice, but one of my favorite things about Mr. Penumbra’s 24-Hour Bookstore by Robin Sloan was how the story contrasted old technology with new. The main character is very much a computer programming / social media guy who finds himself working in a bookstore that is very old school. They have to combine both ways of thinking to reach their goals.

a book with an illness or revolving around medical issues

I kind of feel like I’m taking the easy way out with this one but I do need to leave for work soon and The Fault in Our Stars by John Green is basically the book about illness and medical issues and if by any small chance you haven’t read it yet, stop whatever you are doing and read it immediately. Unless you are like driving a car or preforming open heart surgery – then you should probably stop reading this and get back to doing that.

a book with the craziest character you’ve ever read

I’m not sure if Bernadette is the craziest character I’ve ever read but her mind was one of the most interesting peeks into crazy that I’ve read and Where’d You Go, Bernadette by Maria Semple is a favorite read of mine. It’s written in an epistolary fashion through notes and emails and stuff and it’s really fascinating and just superbly written.

JACIN | The soldier
a book with a military theme

Life After Life by Kate Atkinson is about more than war, but World War II is fairly heavily riddled throughout the book, giving it a militant feel. This book will absolutely make your head spin. You’ve been warned.

Okay I’m not going to tag anybody outright, but if you are reading this hoping I would tag you, then – you know, you’re it!

Yay! Great job. Lots of great books on this list. I’ve added Daddy Long Legs to my TBR list. I hadn’t heard of that one, but it’s short, so I am hoping I can get to it at some time.