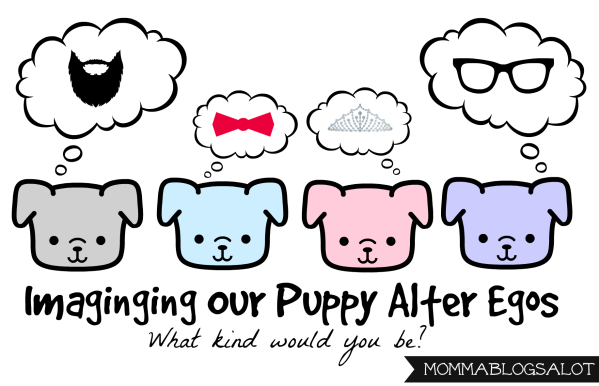 One of this week’s writing prompts at Mama Kat’s writer’s workshop was:

5.) If your family were dogs, what breed would each of them be?

I was immediately intrigued by this idea and started thinking about what breeds my kids and husband would be and how I would describe them. And then an even better idea came to me. I decided to ask the kids for their input and rather than look up images online to try and convey their ideas, I had them draw a picture of each of our puppy alter egos so that you can really visualize their answers. The results? Amazing.

BB described her ideal Alter Dog Ego and her brother drew the accompanying picture. This was kind of a cool exercise for them because 1) apparently none of us are very good at drawing dogs and 2) It was cool to see him try to draw her ideas. He gave his sister ballet slippers on all five puppy feet and a little tutu and colored the dog to her specifications, then drew a tv to play the music that her puppy self would be dancing to.

MM’s initial description was pretty simple. His dog alter ego would be exactly like our dog except quieter. My dream dog, basically. But once he started drawing, his imagination took flight as he created a Super Dog costume and a space ship for his Dog Self to fly around in. I added more text to go along with his ideas which were just terrific.

By the time I asked them to describe what kind of dog Dan and I would be, the kids were overcome with all the silliness and had a lot of ideas. I quickly became every color under the rainbow, though mostly pink and green under BB’s careful coloring hand. She asked for help drawing the outlines of her dogs and a few details like a music box for my dog self to dance to and was kind enough to draw herself turning the music box on for me.

Daddy the Bird Chaser Who Kinda Looks Like a Cat 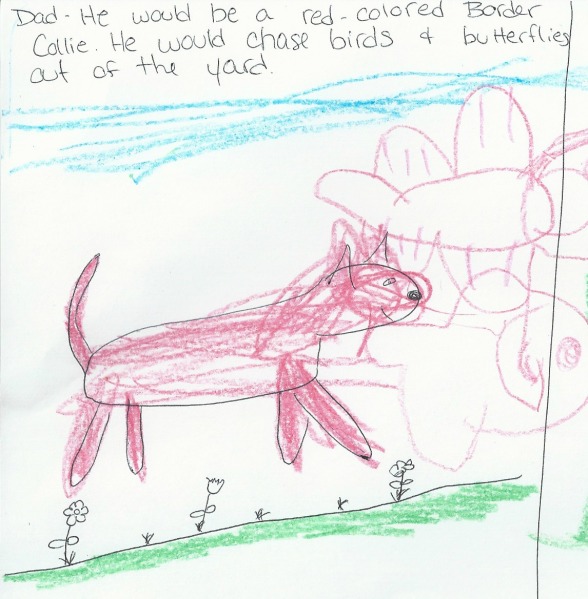 In an attempt to draw different types of dogs, my outline of Daddy Dog ended up looking sort of like a cat – the goal was a border collie… And I failed. And clearly have no idea what a border collie looks like. But BB was quite pleased and got to work coloring him in and drawing what I can only assume are birds and butterflies for him to chase. I added some flowers and grass for good measure.

So there you have it – if my family was dogs, we’d be a mixed bunch of super hero, ballerina, bird chasing, dancing quiet loud soft red pink black green canines, most of which never seem to touch the ground.

What kind of dog would you and your family be?