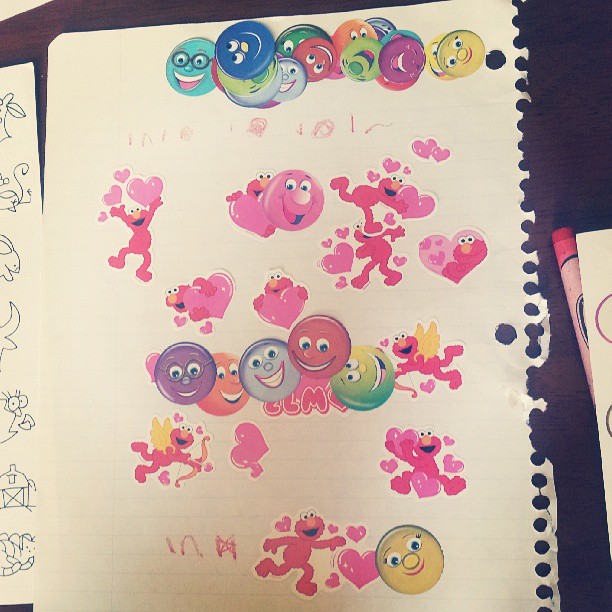 A million years ago on the first day of 6th or 7th grade, a group of the soon to be Popular Girls asked me to join their Sticker Club. I still remember feeling the first tremblings of social anxiety and a fear of not fitting in. Up until then I’d always seemed able to just dive into a group of kids and join their games with little thought of whether I was wanted there. As a Constantly Moving Kid, this skill is pretty important because I was frequently tasked with finding a new group of friends as we moved from state to state and city to city.

But on that morning, as the girls with perfectly combed hair, colorful sundresses and brilliantly white smiling teeth stood at my desk staring down at me with little sticker journals in hand, I felt awkward and plain in my denim jeans that were a little too short and the random t-shirt that had been clean that morning. I suddenly felt less than and ill at ease.

I was like a visitor to a foreign land with no guidebook or knowledge of the local language. I didn’t know the right answer. Did I want to be in a sticker club? What did it entail? How many stickers did I have to buy? What made a sticker cool or Club-Worthy? Were these my future BFFs or was this a cruel trap that would end in me being called a baby and laughed at for the rest of the year?

It was a simple question but it didn’t feel like it and ultimately I imagined asking my dad to buy me stickers and sticker journals all the time and knowing that we didn’t have a lot of extra money, I decided it wasn’t worth the risk and bailed on the idea. I don’t remember what I said to them – did I shrug and say maybe and just never bring it up again or did I say no right away, likely seeming super rude and weird in the process? Who wouldn’t want to be in a Sticker Club?? Stickers are, like, the best!

Looking back, that rejection feels like it was the beginning of the end as far as my shots of being a Popular Girl. There was a moment in the sand there where it could have gone either way but I drew the line by refusing to try. Would it have really been that big a deal to join their club? Stickers are hardly an expensive commodity and my father might have been more than happy to buy me a few sheets in the name of making great friends. I could have gone on to be a cheerleader or date the captain of the football team if I’d said yes that day!

The truth is though, looking back, I don’t think I ever really wanted to be a Popular Girl. I never did like labels and the group of friends I hung out with largely evaded them. We weren’t specifically anything, we were just friends. Some of my friends were geeks, some were big into music or theater, some were considered “popular” and others definitely not. I never cared.

Regardless of what label you want to assign to them, the friendships I forged as a tween and teen were not made by sheets of sparkly stickers but rather by the experiences and trials and tribulations that we shared together.

I am sure that lots of the so-called popular kids didn’t care about labels either and had totally meaningful friendships and that less cool friendships have been formed on less than a sheet of stickers, but my point is (I assume I must have one) that though I sometimes wonder what my life might have been like if I’d joined the Sticker Club that fateful day in middle school, I am grateful for the friendships I made growing up and would hate to have missed out on them for the sake of being Popular.

Stickers are pretty cool though.

I’m writing along with Mama Kat today, answering one of her 5 writing prompts for this week’s Writer’s Workshop. Let me know if you are playing along in the comments section or tell me: What clubs were you in as a kid / or what clubs do you wish you’d joined?