I’ve been spending an inordinate amount of time watching Table Top videos at Geek & Sundry lately, amassing a fairly massive wishlist of games that I want someone to buy me for Christmas (or for Tuesday, I’m an equal opportunity gift receiver). My game cabinet situation would suggest that we already have tons of games to play; but as the kids get older and all of our interests evolve over time, our collection could use an update in my humble opinion.

Here’s what Game Night looks like in our home right now:

We’ve come a long way since Candy Land! Up until a couple years ago, I honestly didn’t like playing games with the kids because Candy Land, Shoots and Ladders, Memory Games, etc. kind of make me want to gouge my eyes out with a stick. Luckily, we’ve since found:

Apples to Apples Kids Edition: I’m pretty much always game for a round of Apples to Apples in any format and the kids edition aimed for kids 7+ is a good fit for our kids right now. I finally have two strong readers in the house which means needing to be able to read cards to play is no longer a deal breaker. The downside: For some reason the Apples to Apples franchise does nothing for dh and he usually won’t play with us. 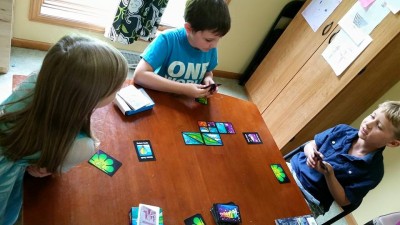 Aquarius: This is a gorgeous tile card game, made by the folks who make Fluxx, that is kind of similar to dominoes. Each round players connect element cards to complete a secret goal. The game play is fast so it’s good for short attention spans and reading isn’t required, so even younger kids can play this one. Not enough strategy for dh, who again will not play.

Disney Princess Cupcake Game: This is my six year old daughter’s favorite game and of all the Disney games and games geared for little kids, it’s the least tedious. It’s easy enough that anyone can play, a small amount of skill and strategy is involved, it has a decent mechanic to keep the game moving forward and interesting and the gameplay i pretty quick.

The Classics: LIFE (Twists & Turns or the Classic Edition) has always been a big favorite of mine. I tend to prefer playing the electronic version with the kids because waiting for the 6 year old to count out the money is tedious but overall I think both games are fun. My husband prefers games like Monopoly or Risk which he is kind of cruelly good at playing. We have a pretty great Doctor Who Risk game that the whole family likes.

With Grown Up Friends

We’re pretty much game for anything (see what I did there?), but lately these are the games in constant rotation at our place:

Fluxx: This is a current favorite in our home – you have to be up for a challenge as the rules in Fluxx are constantly in, well, flux. The way to win the game is constantly changing and it can get pretty crazy. I imagine we’ll be playing this one with the kids in a couple of years but right now it’s a bit over their head.

Munchkin: My nine year old son loves to play Munchkin with us when we have our friends over for a game night and after a few times playing, he’s gotten the hang of it. I sometimes get impatient waiting for him to look through all of his cards and decide what to do – and the game is pretty beyond my six year old – so this one isn’t really a perfect fit as a “family game” right now but as the kids get older, it’s only going to get better.

Cards Against Humanity: We know we’re in good company when we find friends to play this game with. This is somewhat similar to Apples to Apples and always good for a laugh, but it really only works if you are playing with a group of friends that are not easily offended. I cannot stress that enough. But for the rest of us who can giggle at the darkest of humor, this is a fan favorite.

Phase 10: My husband and I kind of fell in love over our mutual love of Phase 10. Okay, that’s not really true at all – but it certainly didn’t hurt. We are both kind of bosses at this game and love playing with people who have somehow never played it before because we get a sick thrill out of absolutely dominating at this game which is a sort of combination between Rummy and Uno.

Pitch: My in laws taught us how to play Pitch this summer and it has quickly become a favorite. My husband and I are pretty much always game for a card game and this one is a lot of fun. Best if you have a large enough group to play in teams, but totally doable with a group as small as three players.

Pandemic: I’m fascinated by this idea of a collaborative game in which everyone wins or loses together. Pandemic looks challenging enough to hold my husband’s interest but the collaborative nature of the game might keep people from getting too competitive (sometimes Munchkin and Risk bring out the worst in us).

Zombie Dice: This is a quick dice playing game that takes about 10 to 20 minutes to play. It looks quick to learn and easy to play – I’m pretty sure the whole family could participate which is great.

Tsuro: This game looks kind of like Aquarius all grown up. Equally, if not more, gorgeous – this is a tile laying game where you place a tile and slide your stone along the path created, but other players’ paths can lead you in the wrong direction, or off the board entirely – making it a competitive and strategic game that I think might be more up my husband’s alley than Aquarius.

Forbidden Island (or Desert): This is another cooperative game that consists of tiles rather than a board. At first glance, this game looked really complicated but once it’s all set up, it actually seems fairly straight forward (but by no means easy – which is good, because easy tends to translate to my husband losing interest).

Betrayal at House on The Hill: I’m told that if you like Pandemic or Forbidden Island, that you’ll love this one which starts out with you and your friends exploring a creepy old house filled with all kinds of things that bump in the night, but then eventually it’s revealed that one of the players amongst you has betrayed everyone. I haven’t gotten around to watching the Table Top video for this one yet but it sounds promising.

What is your favorite game to play (with friends or with your kids)?

What should I add to my ever growing wish list?

2 thoughts on “Game Night: Our Favorites”