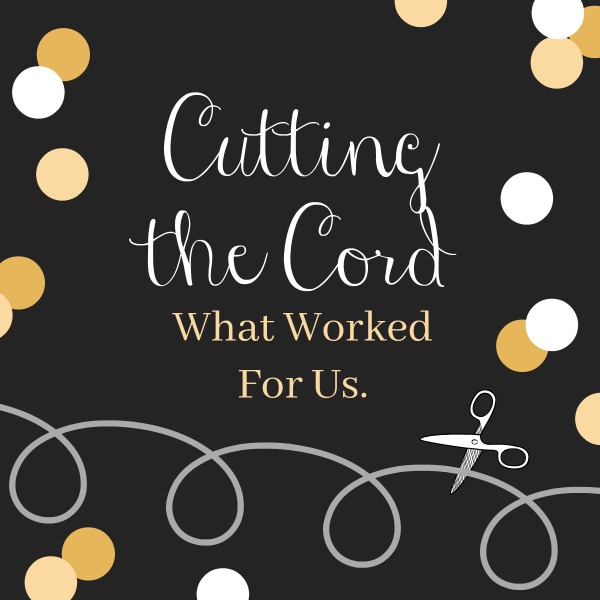 Last summer Dan and I started brainstorming ways we could save some money and our cable bill was quickly mentioned along with “stop going out to eat as often” and “lose Target’s address“. Since those last two are unlikely to happen anytime soon, we decided to start thinking about whether we could ditch cable without cramping our style too much – and whether we’d actually end up saving money in the end.

It took about six months to figure out the logistics AND commit to actually doing something about it. I thought I’d share with you the switches we made to save you a little leg work.

The first thing I did was figure out what tv shows we watch on the reg and how much we were spending for our TV. We are admittedly hardcore TV watchers.

Here’s what we had to begin with and how much it costs us each month:

Exceptions for us included:

Technically my kids also consume a lot of Disney Channel shows but truthfully they are more into watching shows on their Kindles these days and I know there are plenty of other channels in the sea so I decided that Disney Channel wasn’t a priority. Sorry, kids.

Next I started researching all of the Cable alternatives and what channels / shows they offer. Here are the ones I looked into:

TIVO is the only service in this list than includes any kind of contract because their monthly plan requires a 1 year commitment. However, they have a 30 day money back guarantee. The other services all tend to offer a 1 week trial but have no contract at all.

What We Have Now

We decided on a TIVO box because recording shows was kind of a deal breaker for our TV watching lifestyle. We are kind of madly in love with the TIVO setup and I’m glad we splurged but if watching recorded shows isn’t important to you, you could totally save some dollars here.

We added a HULU subscription to bridge the gap for shows we’d be losing because of cutting our cable plan. We are not doing Sling or VUE as of right now because the handful of shows that aren’t available on HULU are available to watch on the channel’s website or App. This includes Lifetime and AMC for us. This isn’t a one size fits all decision though – the shows we watch might be totally different than you – check the channel line ups and see what service is the best fit for you.

So far the only channel that we haven’t accounted for completely is BBC America, which we could get on Sling or VUE but most of those shows we watch can be found on Amazon Prime and other places. So we’re considering this a future problem for right now.

We’re keeping Amazon Prime, obviously, and also Netflix and HBO which you can buy without a cable plan at all.

When we cut our cable we also switched internet providers because we found a different provider that was offering faster internet for less money, at least for the first year. Cord cutters – do your homework and make sure that your Internet provider is still a good deal after your package is gone.

So we are saving over $100 per month and giving up almost nothing. Heck, I’m even finding some new shows to love on Hulu that I couldn’t have watched before.

The moral of the story is: Do your homework, decide what is important to your family, make sure you are getting your money’s worth and if you are ready to try something new – take advantage of those free trials and just see which services you like the best. We ended up with totally different services than we originally expected.

Have you cut the cord yet?

What services does your family use?