Dystopian novels are one of my absolute favorite genres of literature but it’s a heavy genre that is hard to recommend to your own children. Like, I loved The Hunger Games but I’m not sure I want my eleven year old reading about a reality show where children are forced to murder each other. It’s a lot. But he’s at a great age to dip his toe into the world of dystopian novels so I spent some time researching possible titles to recommend to him. I thought I’d share my findings with you.

The City of Ember by Jeanne DuPrau was one of the first titles I found after a quick search. It’s recommended for kids as young as 8 so you don’t have to stress out too hard about recommending this title.

The city of Ember was built as a last refuge for the human race. Two hundred years later, the great lamps that light the city are beginning to flicker. When Lina finds part of an ancient message, she’s sure it holds a secret that will save the city. She and her friend Doon must race to figure out the clues before the lights go out on Ember forever!

Common Sense Media agrees that it’s appropriate for kids 8+ and had no notes of warning for parents. It’s also available as a graphic novel if your kids are as into that as mine. 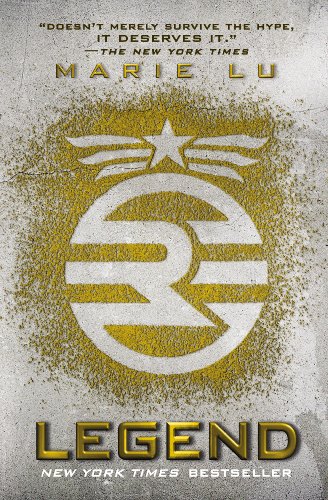 Legend by Marie Lu is recommended for kids in the 7th grade and up on Amazon. Common Sense Media recommends 12+. This one isn’t quite as squeaky clean with one passionate kiss and alcohol is served but the main characters do not partake in it. It also contains a fair amount of violence.

From very different worlds, June and Day have no reason to cross paths – until the day June’s brother, Metias, is murdered and Day becomes the prime suspect. Caught in the ultimate game of cat and mouse, Day is in a race for his family’s survival, while June seeks to avenge Metias’s death. But in a shocking turn of events, the two uncover the truth of what has really brought them together, and the sinister lengths their country will go to keep its secrets. 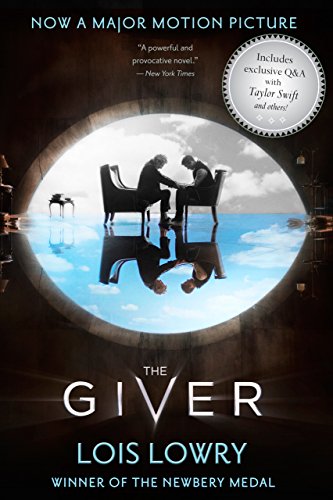 The Giver by Lois Lowry has the stamp of approval of my actual child. He read it in school this year and loved it (thus sparking my desire to find more books for him in the same genre). Common Sense Media recommends this one for ages 11+. There are very mild sexual references and some scenes that might be disturbing (the main character witnesses his father euthanizing a baby) but it’s a classic that opens up a lot of room for discussion.

The Giver, the 1994 Newbery Medal winner, has become one of the most influential novels of our time. The haunting story centers on twelve-year-old Jonas, who lives in a seemingly ideal, if colorless, world of conformity and contentment. Not until he is given his life assignment as the Receiver of Memory does he begin to understand the dark, complex secrets behind his fragile community.

The Maximum Ride series by James Patterson is recommended for kids 11+ on Common Sense Media. The only real warning for this one is that it’s pretty violent. “There are broken noses and bones, knocked-out teeth, and some deaths, guns, explosions, and car chases.”

This one feels a little more science fiction / fantasy than Dystopian but I think it still  fits the bill of being recommended alongside the other titles.

Fourteen-year-old Maximum Ride, better known as Max, knows what it’s like to soar above the world. She and all the members of the “flock”–Fang, Iggy, Nudge, Gasman and Angel–are just like ordinary kids–only they have wings and can fly. It may seem like a dream come true to some, but their lives can morph into a living nightmare at any time…

The Maze Runner by James Dashner was made into a movie a few years ago so it might already be on your radar. Common Sense Media recommends this one for 13+ but kids and parents reviewing seem to agree on 12+.

It’s compared to Lord of the Flies and The Hunger Games. Some consider this one more violent than The Hunger Games so you’ll want to use your judgement on what factor make the book age appropriate for your kids.

When Thomas wakes up in the lift, the only thing he can remember is his name. He’s surrounded by strangers—boys whose memories are also gone.

Outside the towering stone walls that surround them is a limitless, ever-changing maze. It’s the only way out—and no one’s ever made it through alive.

Then a girl arrives. The first girl ever. And the message she delivers is terrifying.

Have you read any of these? Do you agree with the age recommendations? Are there any books I missed that you would recommend?