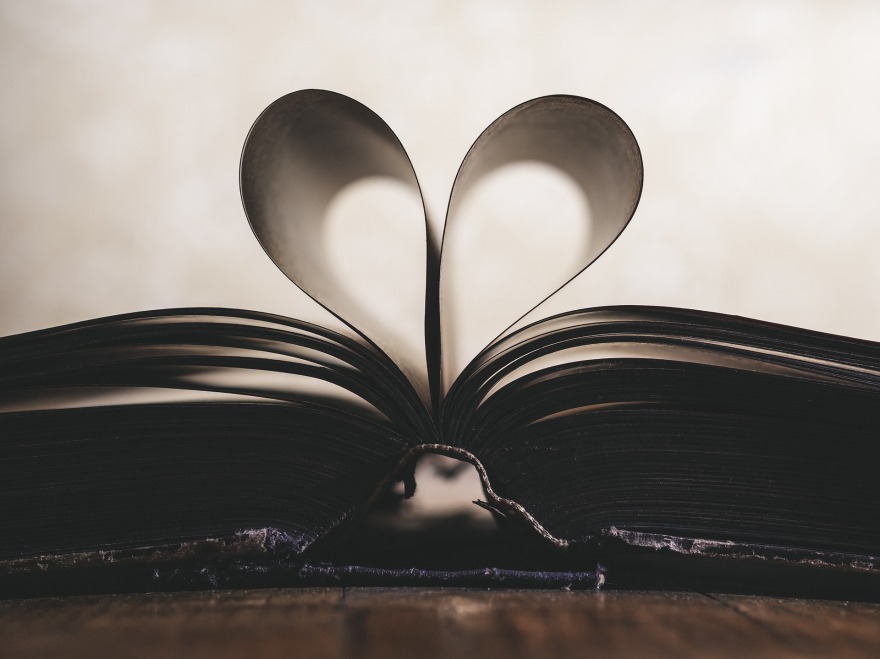 This summer I have been reading some awesome graphic novels aimed at the tweenage set and I thought I’d share some of my favorites so far. I divided this list into three categories, based on the age range that I see them being best suited for. Because “Tween” can be kind of a broad term as kids grow up and change so much over the course of a few years.

For Younger “Tweens” who are about to enter middle school 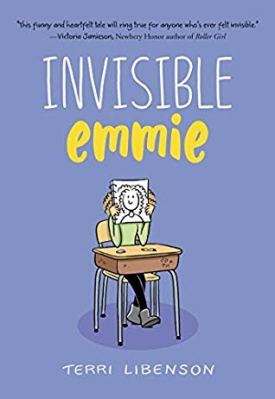 Invisible Emmie by Terri Libenson | This was really sweet. I liked how you got to see the story from different perspectives, like how our attitudes can change our outlook on life. The illustrations are great, the story was easy to relate to and the ending was very uplifting.

I think this book and the others in its series are perfect for girls getting ready to enter middle school. There are some great life lessons that could serve them well but they aren’t delivered in a forced or obvious way.

This is the story of two totally different girls—quiet, shy, artistic Emmie and popular, outgoing, athletic Katie—and how their lives unexpectedly intersect one day when an embarrassing note falls into the wrong hands. 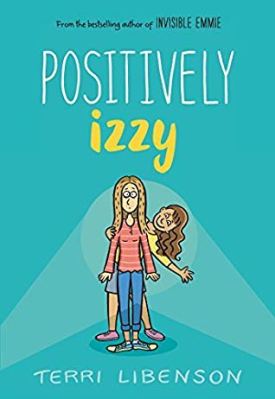 Positively Izzy by Terri Libenson| Another great graphic novel by Terri Libenson. Invisible Emmie had a surprise twist ending so I figured this one would, too, but I have to be honest, I didn’t see it coming until the last second. I love her characters and the story was just as sweet as the first book.

Middle school is all about labels. Izzy is the dreamer. There’s nothing Izzy loves more than acting in skits and making up funny stories. The downside? She can never quite focus enough to get her schoolwork done.

Bri is the brain. But she wants people to see there’s more to her than just a report card full of As. At the same time, she wishes her mom would accept her the way she is and stop bugging her to “break out of her shell” and join drama club.

The girls’ lives converge in unexpected ways on the day of a school talent show, which turns out to be even more dramatic than either Bri or Izzy could have imagined.

These graphic novels by Raina Telgemeier are also great for tweens but I found them to be a little more real. The characters are very fleshed out, they are dealing with real problems – the emotional stakes are a little bigger than the books from the last section. 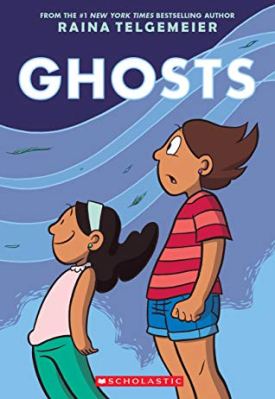 Ghosts by Raina Telgemeier | My 9 year old daughter and I actually both read this one. She loves the author/illustrator who also illustrated most of the new Babysitters Club graphic novels. This graphic novel is a little sad, a little fantastical and very sweet overall. I read it in two sittings after seeing how much my daughter enjoyed it.

“Catrina and her family are moving to the coast of Northern California because her little sister, Maya, is sick. Cat isn’t happy about leaving her friends for Bahía de la Luna, but Maya has cystic fibrosis and will benefit from the cool, salty air that blows in from the sea. As the girls explore their new home, a neighbor lets them in on a secret: There are ghosts in Bahía de la Luna. Maya is determined to meet one, but Cat wants nothing to do with them. As the time of year when ghosts reunite with their loved ones approaches, Cat must figure out how to put aside her fears for her sister’s sake — and her own.” 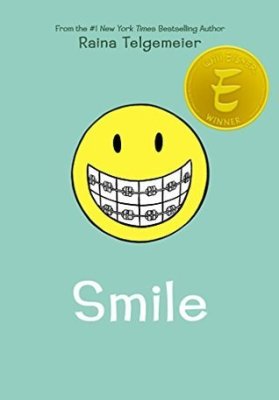 Smile by Raina Telgemeier| After reading Ghosts, I was immediately inspired to read another book by the author. This one was really good. It’s the author’s true story of getting braces – and also going through puberty, dealing with first crushes, frenemies, learning to like herself and not focus on appearances so much. I love a good coming of age story. I read this graphic novel in two sittings and would definitely recommend it to tween girls.

“Raina just wants to be a normal sixth grader. But one night after Girl Scouts she trips and falls, severely injuring her two front teeth, and what follows is a long and frustrating journey with on-again, off-again braces, surgery, embarrassing headgear, and even a retainer with fake teeth attached. And on top of all that, there’s still more to deal with: a major earthquake, boy confusion, and friends who turn out to be not so friendly. This coming-of-age true story is sure to resonate with anyone who has ever been in middle school, and especially those who have ever had a bit of their own dental drama.”

For Older Tweens and Teens Who Have Already “Had the Talk”

These last two are books that I read which by all rights fit the same theme as the other four but contain moments that would have given me pause if my nine year old was reading them. I still might be fine with her reading them to be honest, now that I’ve read them and would be prepared for possible talking points – but I feel the need to add a caution to my recommendation if you and your daughter have yet to discuss birds, bees and the like. I’d maybe flip through the book / comic yourself before passing it along to a younger kid. 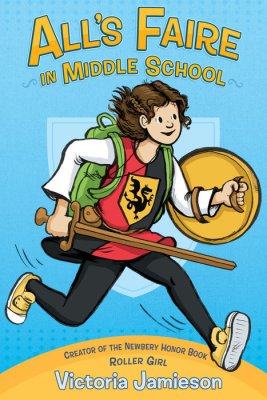 All’s Faire in Middle School by Victoria Jamieson| This book might have actually been my personal favorite of the bunch. I loved the premise. Imogene is starting middle school after being home schooled by her parents who work at a Renaissance faire. They pretty much had me at hello with this premise.

She must battle bullies, strict teachers, trying to fit in, owning up to mistakes, finding real friends – you know, normal middle school stuff. I loved the contrast of life at the faire to life in middle school. This one actually made me cry a couple times!

For the most part this book is totally appropriate for tweens and nothing untoward actually happens but there is a chapter in the book where the main character has puberty on the mind for sure and a younger child or her parent might be a little taken by surprise. As a parent, I’d recommend flipping through this one yourself first and deciding if you want to pass it along to your younger kids.

Eleven-year-old Imogene (Impy) has grown up with two parents working at the Renaissance Faire, and she’s eager to begin her own training as a squire. First, though, she’ll need to prove her bravery. Luckily Impy has just the quest in mind–she’ll go to public school after a life of being homeschooled! But it’s not easy to act like a noble knight-in-training in middle school. Impy falls in with a group of girls who seem really nice (until they don’t) and starts to be embarrassed of her thrift shop apparel, her family’s unusual lifestyle, and their small, messy apartment. Impy has always thought of herself as a heroic knight, but when she does something really mean in order to fit in, she begins to wonder whether she might be more of a dragon after all. 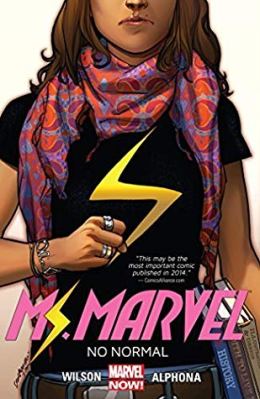 Ms. Marvel, Vol. 1 by G. Willow Wilson, Adrian Alphona (Illustrator), Jacob Wyatt (Illustrator)| This was such a cool super hero story. For anyone who has ever wished to be someone else or have the super cool super powers that they read about in comics or see on tv – this explores what it would be like if that actually happened. The main character deals with normal teenage stuff, family trouble, cultural clashes of being a Muslim in America – and then also has to deal with super powers that she doesn’t know how to control! Very cool.

This comic is honestly fairly tame but the main character is in high school so she’s dealing with normal high school stuff. Again, parents might want to flip through it themselves first to be aware of anything that might be worth having a conversation about.

“Marvel Comics presents the all-new Ms. Marvel, the groundbreaking heroine that has become an international sensation! Kamala Khan is an ordinary girl from Jersey City – until she is suddenly empowered with extraordinary gifts. But who truly is the all-new Ms. Marvel? Teenager? Muslim? Inhuman? Find out as she takes the Marvel Universe by storm! As Kamala discovers the dangers of her newfound powers, she unlocks a secret behind them as well. Is Kamala ready to wield these immense new gifts? Or will the weight of the legacy before her be too much to handle? Kamala has no idea either. But she’s comin’ for you, New York!”

Okay so what graphic novels should I be reading next?