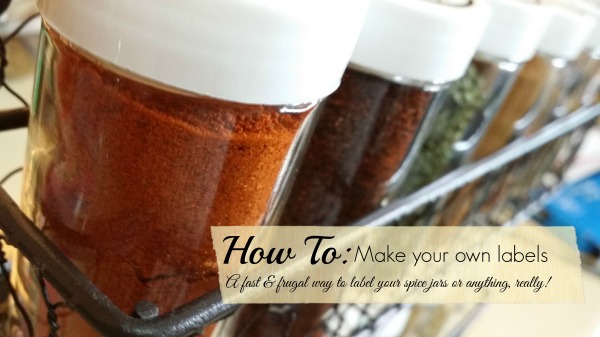 We’ve been storing our spices in a couple of cardboard boxes pretty much since the day we moved into our first apartment all those years ago. It started with one box and as our cooking skills grew we added another box – one for baking and one for cooking basically. But the boxes were impossible to organize – you’d take one jar out and the others would fall over or shift which meant alphabetizing them was a lost cause. This resulted in “Why do we have 3 bottles of cinnamon?” or “I know we have rosemary around here somewhere, but I can’t find it.”

After eight years of marriage and owning more cinnamon than we probably know what to do with, I decided it was time to try something else. The thing is – we’ve been looking for the perfect spice rack for years and never found one worth taking up the counter space. I.e. We’re picky. I don’t like those rotatey spice racks and didn’t want to live with the spices they thought we wanted.

We finally settled on 12 of these spice jars from World Market that were $1 each (sold online in packs of 6) along with this metal spice rack for just $10 that can either be hung on a wall or cabinet door or just placed on a counter if you have the room. World Market has a ton of different jar styles by the way. These were by far the plainest they had but that kind of appealed to us. You could also totally just keep your spices in the jars they came in and put them in the rack, but we were loving the idea of uniformity so we splurged on new jars. In the long run, we’re probably going to need another rack and more jars to hold the rest of our spices but this got us started with the spices we seem to use most often.

So we had our jars and a rack and we found a home for it that we could live with – now we just needed to pick twelve spices to move into the rack and label the jars. We were originally thinking of picking out labels in a store but didn’t find any we liked. Then we were going to use a sticker or label maker to make our own and went through the whole mental process of figuring that out, when my husband found this link to a tutorial for making your own labels using a laser printer and packing tape! I was skeptical but it totally worked! Head over to The Proper Pinwheel for further instruction on making the labels.

I designed my labels using PicMonkey which is an awesome online photo editor / graphic designer that is available for free though there are a lot of spiffy extras for people who pay for a Royale Membership (totally worth it, in my opinion). This label took me about five minutes to design. Feel free to steal it as long as you use it for good and not evil:

Now you just need words. You could add the font for the label right on picmonkey if you want (and they have a lot of beautiful fonts) but I was worried that this would be tedious to then save 12 different images and then compile them all onto one page. In an effort to save time, I saved the logo above and then copied and pasted it 12 times into a LibreDraw file. LibreOffice is basically Microsoft Office but open source (i.e. free). I tried doing this in a word document and it was really difficult to get the text to line up where I wanted it. Helpful Hubby recommended the Draw program which let me make text boxes that I then positioned over each label.

Which method would have been faster in the end? I’m not sure. Either way, I finished the whole process in under and hour, printed the page and then we used the methods shared at The Proper Pinwheel to turn the laser printed page and packing tape into beautiful, homemade labels for our new spice jars. 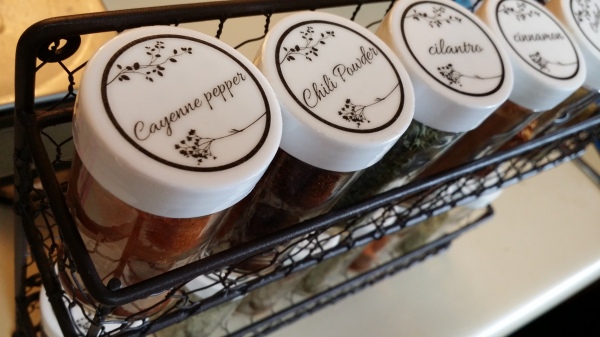 We are both really thrilled with the end result. The labels are so special to us because we designed them ourselves, making them truly unique and we love that if we want to use a bottle for a different spice, the label is just packing tape so it should be easy to remove (and it’s pretty water proof, too!). And having the spices right where we want them and finally, finally alphabetized is making it so much nicer to cook.

2 thoughts on “DIY: Making homemade labels for our spice jars.”