Our first real family vacation was in the summer of 2007 when MM was roughly the same age little BB is now. We went to Hershey, PA and one of our first stops was in Amish Country where we came across this:

A stone turtle?? How adorable? Quick make the baby take a picture on top of it!

You know we also must have spent a good bit of time hovering around him and the turtle, making sure he didn’t fall right off!

Apparently I’ve always had this cumpulsive need to take pictures of my kids posing with random objects. We also have pictures from that vacation of him posing with chickens, old wagons, little coin operated cars outside of diners, you name it, I wanted a picture. But this turtle was special. So when the following year we found this during a vacation to the White Mountains…

Perfect, am I right? It felt like fate had guided us on that vacation to the White Mountains in New Hampshire that fall. That of all the amusement parks and tourist destinations, we’d chosen Santa’s Village to explore that day. I really cannot get over how much MM grew between the summer of 2007 and the fall of 2008. Seriously? Ridiculous.

By now little MM was no stranger to mommy’s photo ops and I’d gotten better at snapping pictures while he did his own thing. I was also reeeeally into punch drunk vibrantly colorful pictures. Also, I feel it should be mentioned that in this second turtle picture we got MM to say, “Slooooow and steady wins the race.” It was adorable and happened many times and happened on camera because I am such a photograph taking rock star mom, dontchya know.

The following year, as some of you may remember, we sort of moved halfway across the country. Our drive to Wisconsin in the summer of 2009 was essentially our summer vacation that year and unfortunately I didn’t find any turtle statues in Niagara Falls, Chicago or Ohio (yes, I looked). We took a few other trips since moving here and still, no turtles.

I had pretty much given up hope of having a fun annual turtle picture tradition, until last week when we took a trip to the Wilderness Resort in Wisconsin Dells.

There sitting in the toddler play area outside the Timberland Play Park was an adorable, perfect for posing with turtle: 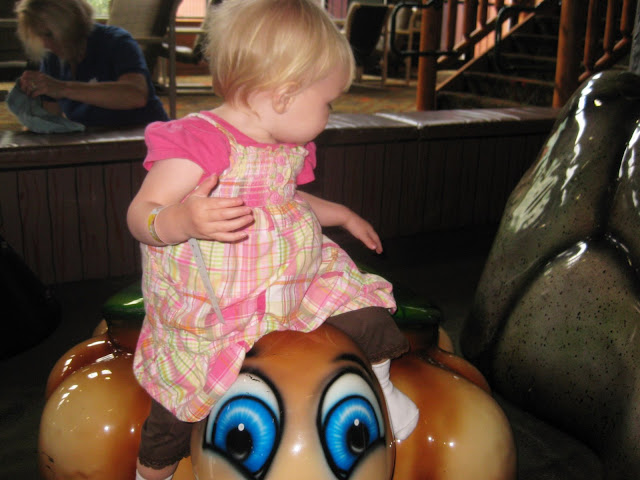 So we may not have found our turtle for 2009 but how just perfect is it that we found our newest posing turtle now when BB is basically the same exact age that little MM was way back when in 2007 when we first found that Amish turtle? 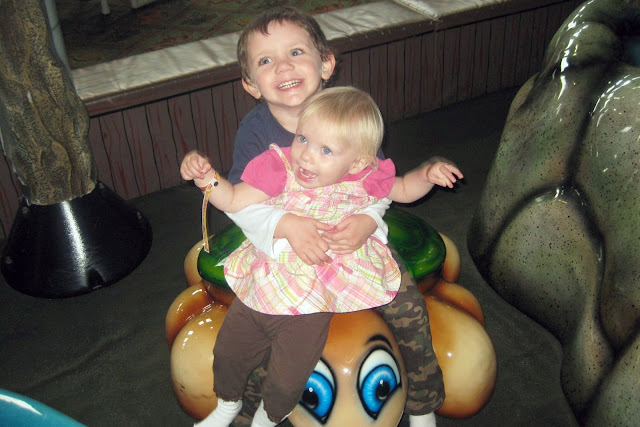 9 thoughts on “the thing about turtles”