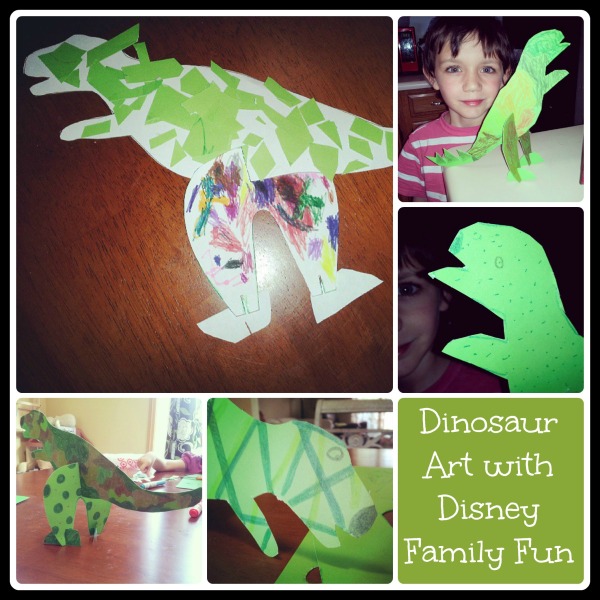 We’ve been finding ourselves stuck inside a lot this summer and I was in desperate need of a quick and easy art project to occupy an hour or two of our time. Flipping through the May issue of Disney Family Fun magazine, I saw a cute stand up dinosaur guy that had been painted on cardboard. They have a free printable on their website so you can trace your own dinos – you’ll need an account on parents.com to login and access it but I’m pretty sure they are totally free and it’ll gain you access to lots of different magazines online.

This sounded like a nice easy project so I quickly printed off a few copies (no need to fight over paper stencils!) and cut out each stencil while the kids were eating lunch. Later I set up the stencils, green card stock, scissors and markers and briefly showed them the idea of the project but tried to encourage that they do their own thing with it.

My son, age 7, has a tendency to closely mimic whatever design I am doing during projects like this – so concerned about “doing it right” – in an effort to foster some creativity I made each corner, nook and cranny of my dinosaur a little different from each other (you can see my Stand Up Guy in the bottom to pictures of the collage above). He tried to keep up with me for awhile, but eventually my son also let himself just do his own thing and was really proud of the results (see the two pictures on the right hand side).

Then there’s my daughter – a three year old who absolutely marches to the beat of her own drum. Rather than trace the stencil on the green paper, she began cutting little pieces of green paper and placing them on her stencil in a mosaic style. I was so impressed with her creativity, that I offered her a glue stick which she happily accepted. She really spent most of the project practicing cutting and gluing, which is really a perfect use of our time and I was so proud of her. You can see her results in the big photo of the collage which was a little too floppy to stand but so adorable!

After making our dinosaurs, my son decided to use all of our scrap papers to be food for the dinosaurs to eat and building blocks for a Dinosaur City – no scrap gets unused under his watch! So now, my youngest has worked on some motor skills, both kids have gotten a lesson in creativity and we’re recycling – all for free, basically, as we used supplies we already had on hand.

By the time they were done crafting and playing, dinner was ready!

Disclaimer: Disney Family Fun did not sponsor this post, request it or have any idea that my children like making paper dinosaurs. These thoughts are my own and I am writing about them simply to share the project idea with other tired mommas out there looking for a quick art project fix.