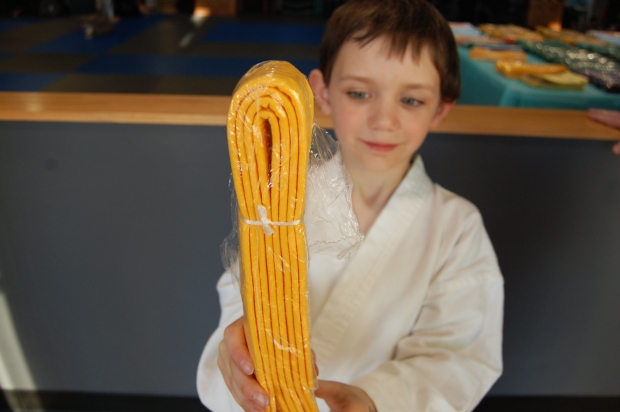 My son just had another karate promotion. They promote roughly every two months so after awhile it’s kinda like ::yawn:: Oh, another one? Except this one really was kind of a big deal because he was graduating from the Kinder Kickers program and moving up to Level One aka The Real Belts.

Promotion Night is kinda crazy because all the Little Ninjas and Kinder Kickers and all their parents and some grandparents and uncles and second cousins all come together to celebrate their promotion. The room is packed full of relatives taking pictures on cell phones, iPads and big honking cameras like mine.

The kids show off everything they have learned in the last two months and it’s always really impressive to see what our 4, 5, 6 and 7 year olds are capable of doing. I think every parent / relative in the room was thinking, “Man am I out of shape” as they watched their kids do a gagillion push ups and flying front kicks and extreme horse stances. I know I was.

Apart from being a weepy proud momma and trying to hide in a slightly less crowded corner somewhere so that my social anxiety doesn’t run kicking and screaming out the door, I’ve got another mission on Promotion Nights. As I told my husband, karate promotion is like my own little Photography Olympics. 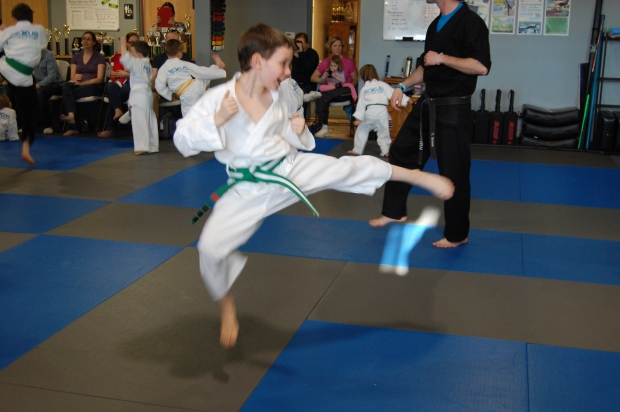 It’s an awesomely fun challenge to catch a picture of your kid flying in midair and have it be mostly in focus and not have random strangers jump in front of the picture. I am getting pretty darn good at this game, too. 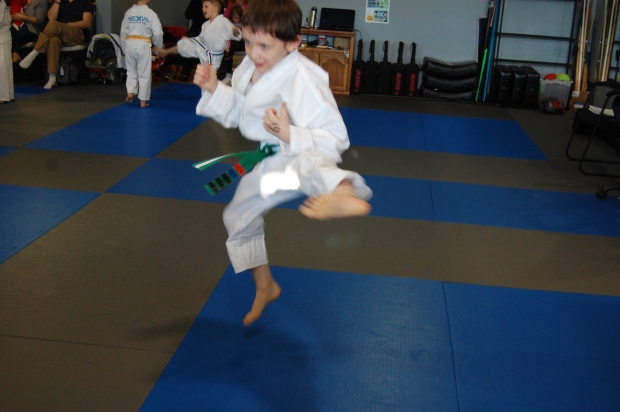 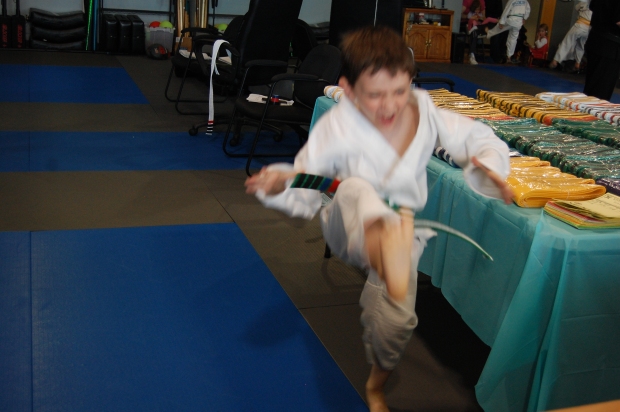 And it distracts me from the wanting to run kicking and screaming out of the door thing which is a nice bonus. This was a pretty successful promotion in terms of picture turnout and Level of Jen’s Social Anxiety. I found the perfect little corner to mostly just focus on MM and getting awesome flying kicking pictures and only had to deal with crowd control when BB wanted to use the bathroom. Hubby helped a lot, so he probably found the night a lot more stressful than I did but he puts up with it like a champ.

But at the end of the night, our little boy became a Level One Gold Belt and his teacher made an awesome speech about what a big deal it was so I’m pretty sure MM has never been prouder of himself than he was that night.

And for good reason.