Wolf Hall by Hilary Mantel for my book club on Wednesday. I’m only 1/3 through the book so my odds of finishing on time are not looking great. It took me awhile to get into this one but after the first 100 pages or so it starts to pick up. I’m still not crazy about the narration and sometimes the subject matter borders on too heavy for night time reading.

On nights when I need something lighter, I’ve been picking up John Green; I’ve read a couple chapters of An Abundance of Katherines as well as Paper Towns but have made little progress with either as I really am trying to focus on the book club pick.

We took the kids to see the new Cinderella and it was fantastic. I thought they did a good job of honoring the original but still bringing something new and untold to it. Lily James was an outstanding Cinderella and I loved Holliday Grainger and Cate Blanchett and Helena Bonham Carter and basically everybody. It was fun picking scenes out from the original Disney cartoon version and seeing them come to life and the twists and turns were wonderful. Funny, heartfelt, all the things.

We’re watching Season Seven of Parks and Rec on demand right now. The menu for U-Verse’s On Demand is horrendous but getting to binge watch for free without waiting for the season to make it’s way to Netflix is worth it. I’m a little misty eyed at the thought of the show just being over but my DVR is all like “hurry up, I’m running out of room while I wait for you to move on from this addiction.” So.

I rented Lucy and The Other Woman this weekend. My thoughts:

Lucy has a fascinating premise and of course Scar Jo is always fabulous and really the obvious choice for a “perfect woman” – I was impressed with her portrayal of a creepy intelligent super person as well as the nervous wreck normal girl she was at the beginning. And everyone loves Morgan Freeman and yes obviously he was terrific. But something about the story was almost too lofty to permeate. Like it didn’t really leave me feeling anything so much as observing.

The Other Woman is an absurd chick lit romp with Cameron Diaz at her finest and Leslie Mann and Kate Upton are also fantastic. For any girl who has ever been the other woman or found out about the other woman or who can simply commiserate based on being a human being with feelings – this one is funny, touching, inspiring, silly, smart, ridiculous. I’m not saying it was AMAZING but it was VERY GOOD. I’m not sure if your male significant others will appreciate it – maybe save it for a girls night so you can enjoy it without them. 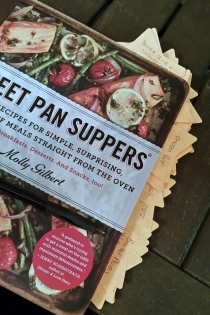 I made apricot baked french toast using a recipe from Sheet Pan Suppers by Molly Gilbert. Being a family of four, there was more than enough for one meal. I thought it came out pretty good but I think I poured the milk a little too heavily.

We were on vacation for most of last week and found ourselves eating out a lot and eating a lot of convenience junk and amusement park food so our diets could use a bit of a cleanse right now. Also our refrigerator is filled to the brim with random leftovers, beverages and just random stuff so I am hesitant to buy any real food as I have nowhere to put it. I’m trying to turn all that random into meals so I can clear out space for healthy food.

I broke down and designed new business cards on moo.com today – I’m terrifically pleased with the end result but assume that this means that some key piece of information about me is now going to change and render them unusable because that’s how this goes, right?

I just ordered book five of the Underland Chronicles for MM’s 9th birthday: Gregor and the Code of the Claw by Suzanne Collins. He is obsessed and fanboying all over the place and I couldn’t be prouder really.

MM has reached a new rite of passage. Last week we took him in for an eye exam and then bought his first pair of glasses. He’s still a little apprehensive about it but I’m just swooning over how adorable he looks in them. Damn right, my kids are rocking Ray Bans.

We’re still seriously considering buying a color laser printer and saying good bye to our ink jet. My husband didn’t really “get” why I was so angsty towards it and agreed to sit and look at it and maybe fix the issues it was having. 30 minutes later I think he wanted to chuck it out the window, too.

Color laser printers are not all a great deal and there are a lot of different models and options out there, some more affordable than others. We’re currently leaning towards this one by Brother that seems to have decent PPM and has toner that gets an impressive yield. We’re still balking a little at the price but seeing how many pennies we can pinch together to make it happen. Because it isn’t an All in One, we’re considering either keeping the ink jet as a copy machine / scanner or maybe getting something like this. Or none of these things. You know.

What are you into right now?