I thought it would be fun to try something new with book reviews by my kids. Bear with me, but doesn’t it make more sense to hear about the book straight from the kid? I thought it was worth trying – and since a written review by my 9 year old would be roughly seven words long, I thought I’d try a video review! Ohhhhhh….

Today we are reviewing: 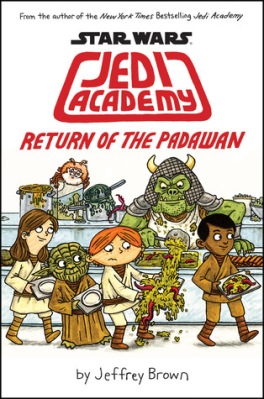 This is book two in a series, as you can see. The first book is just called Star Wars: Jedi Academy. In book two, Roan is returning to his second year at Jedi Academy – this year he falls into the “Mean Kid” crowd after having a falling out with his old friends.

Here’s a description from the folks at Amazon:

After surviving his first year at Jedi Academy, Roan Novachez thought his second year would be a breeze. He couldn’t have been more wrong. Roan feels like he’s drifting apart from his friends, and it’s only made worse when Roan discovers he’s not the amazing pilot he thought he’d be. When the school bullies take him under their wing, he decides they aren’t so bad after all–or are they?

This year, Roan will have to face alien poetry tests, menacing robots, food fights, flight simulation class, online bullies, more lightsaber duels, and worst of all . . . a girl who is mad at him.

This incredible, original story captures all of the humor, awkwardness, fun, and frustrations of middle school–all told through one boy’s comics, journal entries, letters, sketches, e-mails, and more.

And finally, the video review:

MM says he most liked reading about the star training and that he thinks this book series is very funny.

Have you or your kids read this book? What did you think?