Top Ten Tuesday is Hosted by The Broke and The Bookish.

ONE The Rosie Project by Graeme Simsion, which was originally being developed with Jennifer Lawrence as the lead but apparently she dropped the role. I really loved this book so I hope that her exit doesn’t hugely delay a movie coming out because I’m optimistically looking forward to it.

Don Tillman, professor of genetics, has never been on a second date. He is a man who can count all his friends on the fingers of one hand, whose lifelong difficulty with social rituals has convinced him that he is simply not wired for romance. So when an acquaintance informs him that he would make a “wonderful” husband, his first reaction is shock. Yet he must concede to the statistical probability that there is someone for everyone, and he embarks upon The Wife Project. In the orderly, evidence-based manner with which he approaches all things, Don sets out to find the perfect partner. She will be punctual and logical—most definitely not a barmaid, a smoker, a drinker, or a late-arriver.

I think you can see where this is going. I think it would make a great movie.

TWO Mockingjay by Suzanne Collins (Part 2): Somehow this movie series has managed to mostly live up to the books which is really high praise because most of the YA dystopianish books of its kind have not done nearly as well. These ones almost hold up on their own as something you could watch without having read the books. But seriously, read the books!

“Katniss Everdeen, girl on fire, has survived, even though her home has been destroyed. Gale has escaped. Katniss’s family is safe. Peeta has been captured by the Capitol. District 13 really does exist. There are rebels. There are new leaders. A revolution is unfolding.” 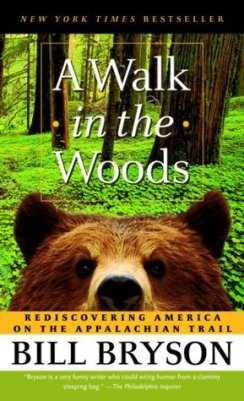 THREE  A Walk in the Woods by Bill Bryson – this movie adaptation came out in September and it stars people like Nick Offerman, Robert Redford, Nick Nolte, Emma Thompson… do I need to go on? I actually still haven’t read this book but it’s been sitting on my nightstand and knowing the movie exists will hopefully encourage me to get reading!

The Appalachian Trail trail stretches from Georgia to Maine and covers some of the most breathtaking terrain in America–majestic mountains, silent forests, sparking lakes. If you’re going to take a hike, it’s probably the place to go. And Bill Bryson is surely the most entertaining guide you’ll find. He introduces us to the history and ecology of the trail and to some of the other hardy (or just foolhardy) folks he meets along the way–and a couple of bears. Already a classic, A Walk in the Woods will make you long for the great outdoors (or at least a comfortable chair to sit and read in).

FOUR The Girl With All the Gifts by M.R. Carey apparently began filming in May 2015 and will star Glenn Close, Gemma Arterton, and Paddy Considine, and will be directed by Colm McCarthy (Sherlock, Doctor Who). This book was kind of amazing and is sure to give us all the feels.

Melanie is a very special girl. Dr. Caldwell calls her “our little genius.”

Every morning, Melanie waits in her cell to be collected for class. When they come for her, Sergeant Parks keeps his gun pointing at her while two of his people strap her into the wheelchair. She thinks they don’t like her. She jokes that she won’t bite, but they don’t laugh.

Melanie loves school. She loves learning about spelling and sums and the world outside the classroom and the children’s cells. She tells her favorite teacher all the things she’ll do when she grows up. Melanie doesn’t know why this makes Miss Justineau look sad.

FIVE The Martian by Andy Weir has been getting so much attention lately that it almost seems redundant to mention it, but I am really looking forward to both reading the book and seeing the film adaptation. My husband adored this book and has been needling me to read it.

Six days ago, astronaut Mark Watney became one of the first people to walk on Mars. Now, he’s sure he’ll be the first person to die there. After a dust storm nearly kills him & forces his crew to evacuate while thinking him dead, Mark finds himself stranded & completely alone with no way to even signal Earth that he’s alive—& even if he could get word out, his supplies would be gone long before a rescue could arrive. Chances are, though, he won’t have time to starve to death. The damaged machinery, unforgiving environment or plain-old “human error” are much more likely to kill him first. But Mark isn’t ready to give up yet. Drawing on his ingenuity, his engineering skills—& a relentless, dogged refusal to quit—he steadfastly confronts one seemingly insurmountable obstacle after the next. Will his resourcefulness be enough to overcome the impossible odds against him?

5 Books that SHOULD be a movie: 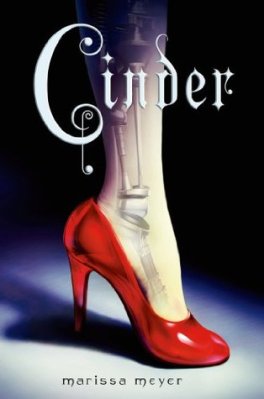 SIX Lunar Chronicles series by Marissa Meyer – This series has been optioned for production but any further details are scarce. This would be at the top of my wishlist for book to movie adaptations so I hope it really does get developed and doesn’t just sit in that middle space forever like so many book to movie deals do.

Humans and androids crowd the raucous streets of New Beijing. A deadly plague ravages the population. From space, a ruthless lunar people watch, waiting to make their move. No one knows that Earth’s fate hinges on one girl.

Cinder, a gifted mechanic, is a cyborg. She’s a second-class citizen with a mysterious past, reviled by her stepmother and blamed for her stepsister’s illness. But when her life becomes intertwined with the handsome Prince Kai’s, she suddenly finds herself at the center of an intergalactic struggle, and a forbidden attraction. Caught between duty and freedom, loyalty and betrayal, she must uncover secrets about her past in order to protect her world’s future.

Did you know? This series all started as a NaNoWriMo project! Proof that the mad dashed 30 day writing spree can yield amazing results! 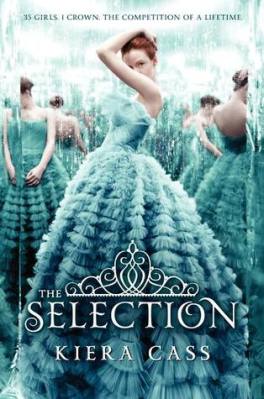 SEVEN The Selection by Kiera Cass seems to also be making it’s way into production but this isn’t the first time we’ve been promised a tv or film adaptation of this series so I’m trying not to get my hopes up yet. This book series is kind of like The Bachelor meets The Hunger Games and it has a rabid fan following so I’m really not sure what’s taking Hollywood so long because it seems like a sure thing to me.

For thirty-five girls, the Selection is the chance of a lifetime. The opportunity to escape the life laid out for them since birth. To be swept up in a world of glittering gowns and priceless jewels. To live in a palace and compete for the heart of gorgeous Prince Maxon.

But for America Singer, being Selected is a nightmare. It means turning her back on her secret love with Aspen, who is a caste below her. Leaving her home to enter a fierce competition for a crown she doesn’t want. Living in a palace that is constantly threatened by violent rebel attacks.

Then America meets Prince Maxon. Gradually, she starts to question all the plans she’s made for herself—and realizes that the life she’s always dreamed of may not compare to a future she never imagined. 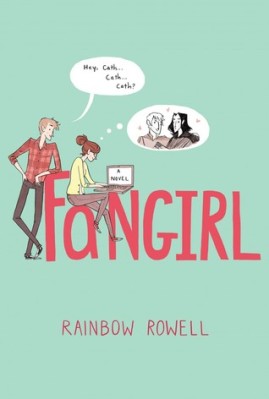 EIGHT Fangirl by Rainbow Rowell is a book that most fans want to see made into a movie but doesn’t seem to be getting much traction despite an amazing fan-made adaptation starring Mary Kate Wiles that had just about every fangirl squealing with delight. Dreamworks bought the rights to Eleanor and Park so maybe it’s just a matter of time?

Cath is a Simon Snow fan.

Okay, the whole world is a Simon Snow fan…

But for Cath, being a fan is her life—and she’s really good at it. She and her twin sister, Wren, ensconced themselves in the Simon Snow series when they were just kids; it’s what got them through their mother leaving.

Reading. Rereading. Hanging out in Simon Snow forums, writing Simon Snow fan fiction, dressing up like the characters for every movie premiere.

Cath’s sister has mostly grown away from fandom, but Cath can’t let go. She doesn’t want to.

Now that they’re going to college, Wren has told Cath she doesn’t want to be roommates. Cath is on her own, completely outside of her comfort zone. She’s got a surly roommate with a charming, always-around boyfriend, a fiction-writing professor who thinks fan fiction is the end of the civilized world, a handsome classmate who only wants to talk about words… And she can’t stop worrying about her dad, who’s loving and fragile and has never really been alone. 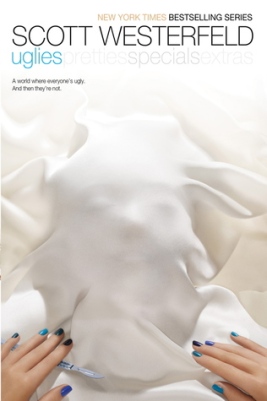 NINE Uglies by Scott Westerfeld seems to be in production purgatory but I hold out hope that someday 20th Century Fox will either make the movie already or let someone else make it. This was one of my first YA dystopian novels and continues to be a longtime favorite.

Tally is about to turn sixteen, and she can’t wait. In just a few weeks she’ll have the operation that will turn her from a repellent ugly into a stunning pretty. And as a pretty, she’ll be catapulted into a high-tech paradise where her only job is to have fun.

But Tally’s new friend Shay isn’t sure she wants to become a pretty. When Shay runs away, Tally learns about a whole new side of the pretty world– and it isn’t very pretty. The authorities offer Tally a choice: find her friend and turn her in, or never turn pretty at all. Tally’s choice will change her world forever…

TEN All the Light We Cannot See by Anthony Doerr was picked up by 20th Century Fox so we’ll see what happens with it. My book club just adored this story and I could see it being an amazing movie if done well.

Marie-Laure lives with her father in Paris near the Museum of Natural History, where he works as the master of its thousands of locks. When she is six, Marie-Laure goes blind and her father builds a perfect miniature of their neighborhood so she can memorize it by touch and navigate her way home. When she is twelve, the Nazis occupy Paris and father and daughter flee to the walled citadel of Saint-Malo, where Marie-Laure’s reclusive great-uncle lives in a tall house by the sea. With them they carry what might be the museum’s most valuable and dangerous jewel.

In a mining town in Germany, the orphan Werner grows up with his younger sister, enchanted by a crude radio they find. Werner becomes an expert at building and fixing these crucial new instruments, a talent that wins him a place at a brutal academy for Hitler Youth, then a special assignment to track the resistance. More and more aware of the human cost of his intelligence, Werner travels through the heart of the war and, finally, into Saint-Malo, where his story and Marie-Laure’s converge.

Which book to movie adaptations are you most excited to see? Share your picks in the comments section!