I really didn’t mean to go so long without posting anything other than the occasional tag. It seems like life is determined to keep me busy – not with anything necessarily bad or strange, just life stuff.

Before I get sucked into the Time Vortex again, here are some thing I forgot to tell you about when I was busy being busy. 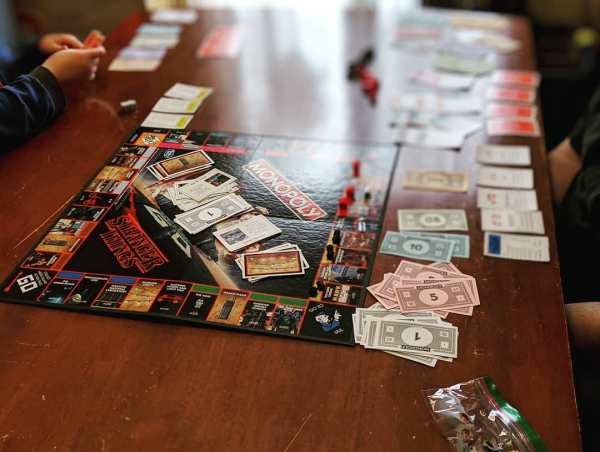 What do you do during the day on Thanksgiving? We weren’t hosting this year and ended up with a blissfully open morning. In between finishing up some side dishes we spent the morning watching the parade on tv; the boys played video games; and we even had time to play a game of Stranger Things Monopoly. The last time we played, I won my  first game of Monopoly ever in my whole life which is why I even agreed to playing twice in a six month period. Lightning, sadly, did not strike twice. I went bankrupt relatively early and got to watch my husband and son battle it out to the bitter end. No big surprise that Dan the Man won in the end – he’s The Monopoly King in our house.

One of the dishes we brought to Thanksgiving dinner was my MIL’s famous rum cake recipe. BB was eager to help me make the cake this year and is very into the idea that it’s a family recipe to be passed down to her. The only reason I even have the recipe is because we moved halfway across the country and Grammy didn’t want her poor kid to go without a rum cake indefinitely. Now I get to bring it to parties with me and wow the socks off of everyone. BB was a great help of course.

I spotted this little dog toy at my local pet store the other day and was like “Where have you been all my life?” Or at least all of my dog owning life. The Hear Doggy toys claim that they contain an ultrasonic squeaker that only dogs can hear. I don’t know if that’s true or not but I can tell you that I don’t hear any squeaking and that’s good enough for me. Am I the only one that thinks squeaky toys are a cruel torture for pet parents (or parents of human children)? I’m looking forward to giving this to our four legged buddy on Christmas morning.

I don’t really remember how the conversation started but I suggested that MM try on his dad’s hat the other day at dinner so that we could see what he would look like “as an old man” and then I squealed with delight and insisted on taking a picture because I cannot handle this cuteness. His father looks equally handsome in the hat, but seriously? I cannot even stand it. Both of my kids are looking so grown up these days but in this picture he like transcends time. He’s about to sweep chimneys and sing in a musical and I cannot even.

Ok last thing – I found this and a million other intricately folded post-it notes that opened to reveal a Hogwarts acceptance letter and supply list for Taylor the Unihorn and someone named Dokaro Watachl. I’m incredibly jealous that they have been accepted (or excepted) to Hogwarts and I still haven’t received my letter. Also, I feel like this is proof that I’m doing something right.