This week the Top 5 was revealed on American Idol. I’ve had to say goodbye to a few favorites this week (loved Joey Cook and Qaasim Middleton) but overall I’m pretty pleased with how America has been voting. I’ve been voting this year, too, which is relatively new for me as I never really had time to vote before voting closed in years past. They’ve finally accepted the large amount of DVR viewers though and allowed us plenty of time to chime in with our opinions.

Here’s how I voted this week: 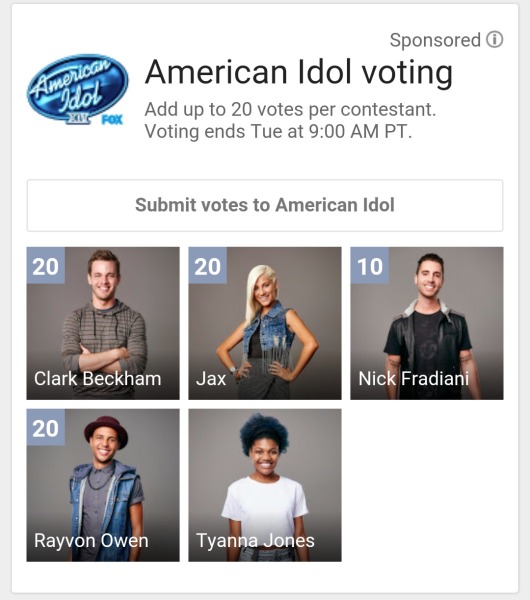 I thought Clark Beckham was overall strong in both rounds. I loved his first performance of Yesterday by The Beatles and although I’m not a big Biebster, I also liked his rendition of Boyfriend in round two – I disagree with the judges on this one. I liked his arrangement and I wish they would stop trying to change him. I did have to laugh at his interpetation of this week’s theme which was Arena Anthems – I think he just interpreted that as “really popular songs by these popular people” – but I digress.

Jax always wins me over. I adore her voice, so even though I honestly thought the energy in her first performance of Are You Gonna Be My Guy by Jet was just off somehow – like the crowd wasn’t as amped as she was and I hate it when contestants change pronouns in songs – just own it, you know? But I love her voice so it still sounded good – and in round two she got back behind the piano where I love her and sang White Flag by Dido and it was just everything.

Rayvon was a lot more like the Rayvon I’ve known and loved from the beginning this week. His first performance blew me away and I was like “YES! HIM! THAT!!!!!!” after he finished singing  Sam Smith’s Not the Only One. I think it’s the first time he’s not smiled while singing and although I personally love his smiley songs, this was reallly good, too. I’ll be honest, his round two performance of Go Your Own Way was just meh for me for the most part until he’d get to the melody and you could actually hear him but it didn’t matter because round one was everything for me.

Now don’t get me wrong, I thought Quentin did really well this week – at least I  really enjoyed his interpreation of Shake it Out by Florence & The Machine which seemed weirdly perfect for him and I was pleased to see that he wasn’t acting like a thug that was about to mug Harry this week – and part of me sees him and thinks “He’s got that it factor!” but I’m not sure it’s an American Idol it factor at the end of the day so I wasn’t really disappointed to see him go.

Nick Fradiani is a conundrum for me because he seems like a sweet guy and he does have a good voice but he’s so one note to me – like he bores me to tears, honestly. I’m glad he’s doing well because he is working hard and “he’s got a great personality” but if I’m going to be honest with myself, I wouldn’t buy his CD.

I’m feeling guilty about not giving any votes to Tyanna because she has a princess name and she’s so talented but the truth is I didn’t like either of her song choices and I’m worried she’s petering out. I thought Party in the U.S.A. by Miley Cyrus sounded completely wrong for her voice and did her no favors because it’s shallow and vapid and she is clearly not – and then Heaven by Bryan Adams just seemed… too mature. She’s somewhere in the middle and she knows it and it felt like she was just trying to pander to other age groups / genres or something. I don’t know – it was just – off. But I’ll forgive her if she’s back next week and she probably will be.

Are you watching this season?

Who is your FAVE this week? Who are you ready to see go home?