When we embarked on this trip, I was still fairly certain we were crazy. Despite months of planning and a binder full of maps, itineraries, meal plans and more – I was pretty concerned that we were in over our head and attempting too much in too short a time. It couldn’t possibly all go according to plan.

And while it definitely didn’t all go to plan, we totally pulled it off. I tried to focus on the trip in small chunks. So rather than think about how we had to get to Florida by such and such day, I just thought “Today we are going to Ohio.” And so forth. I think this plan alone was the main thing keeping me sane each day. With  that in mind, here is a small recap of our first two days on the road. 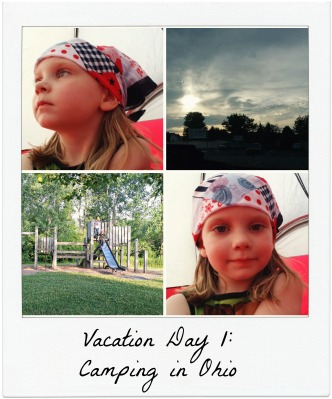 We were headed for Maumee Bay State Park, which is in the western tip of Lake Erie in Ohio. Day one looked a lot like this:

Basically we didn’t really enjoy our time in Ohio but mostly because it involved tons of boring roads, followed by searching in vain forever for an alternate route to get to our campground and then camping in the rain. It’s not really Ohio’s fault but it also kind of is…

We kept the kids busy for all those driving bits with my Amazing Epic Road Trip Boredom Box filled with wrapped packages of new books to dole out over the course of the trip, most relating to the destination of that day’s driving like a book about Niagara Falls on our drive to New York on Day Two. I had something to hand the kids every day that we’d be on the road. This plan was both awesome and overkill. The kids loved the gifts and it kept them busy but we were gone for 3 1/2 weeks and on the road for like 10 days which meant 20+ books eventually cluttered the back seat and drove us crazy every time we got in or out of the truck. I think the idea would be stellar for a smaller trip though.

Another boredom buster idea: We loaded a few movies onto my tablet which we attached to the back of our center console with a bungee cord (my tablet has one of those covers with a folded front cover thing so if you fold that back behind the tablet and loop a bungee cord through… ta da! Homemade entertainment system on the go. Normal people might already have travel DVD players or something but for the rest of us – this worked out really well!

After we eventually found a bridge to get to the campground (the main bridge was closed for like 2 years and our GPS seemed completely unsure how to handle this problem) we set up camp, hubby grilled dinner and we slept somewhat soundly in spite of the major storm that felt the need to follow us from Wisconsin all the way to Massachusetts.

The kids watched Despicable Me on Day Two and while we were at a rest stop in Ohio my daughter found and fell madly in love with a stuffed unicorn just like the one in the movie. She basically refused to leave without it and gave her daddy That Look so he totally melted and convinced me that it would be a good early birthday present. Basically she has us wrapped around her finger and it was a really cute unicorn. While driving to New York that morning I sang sleepy love songs to my coffee, i.e. I was over tired and thought the dumbest things were funny and amused myself for serious HOURS by pretending all the songs on the radio were about my coffee.

Oh, won’t you stay with me?
‘Cause you’re all I need
This ain’t love, it’s clear to see
But darling, stay with me

Stay with Me by Sam Smith

All of Me by John Legend

Well, I don’t know how you do it to me
You make my brain just stop
Sink my heart to my feet
It’s like a roller coaster
But I’m only going up
I’m in crazy stupid love

Just… pretend all those songs are about your coffee and it’s hysterical. Probably. Right?

Before reading about the rest of our adventure in New York, let’s come up with more love songs that should be about coffee. If you play along, leave your best ones in the comments section below!

Anyway, eventually we woke up and eventually after that we got to New York. We took the kids to Niagara Falls which was kind of a big deal because the last time we were there was when we moved to Wisconsin five years ago: MM was about 3 years old and I was 7 months pregnant with BB and we were doing this trip in reverse, driving from Massachusetts to Wisconsin about to move to a state where we knew NOBODY. CRAZINESS. Probably the best thing we’ve ever done but we didn’t know it then. Being over here on the other side now is absolutely unreal.

The weather was still pretty hectic. It wasn’t raining but it was so windy that the Falls were blowing enough mist onto us that it felt like rain. We oohed and ahhed over the falls and took some pictures. Another mom there offered to take a family photo of us in return for me doing the same for them. Of  course only three of us decided to participate for said photo but I was still thrilled to get the picture. I’m also really amused by all the pictures I took where there are girls behind us just staring at their phones right in front of such a beautiful historical landmark. I’d like to give them the benefit of the doubt that they are maybe checking out their own pictures that they just took but they’re probably just playing Angry Birds.

Due to traffic and luck, we were running super behind that night and with the storm still following us doggedly, the idea of setting up camp late in the rain was sounding so not fun. We stopped for dinner about an hour outside of Niagara and then got a room at the hotel next door.

For some reason I was really concerned that we’d never find a hotel with a room available and it would be like Mary and Jesus looking for a room at the inn minus anyone giving birth and hopefully minus sleeping in a barn. But lo and behold, there was a room available at the very first place we looked and the woman behind the desk was super friendly and accommodating and the kids thought the whole thing was basically the best idea ever.

Other things we did in New York:

Stay tuned for more stories of our month on the road. Next up will be a recap on our week in Massachusetts visiting family!

One thought on “Road Trip Diary: Ohio and New York”